A literal understanding of sastra, as it seems to be regarded in some sections of the greater Vaishnava community, is looked down upon as being neophyte or simply not intellectually satisfying. Some even consider the literal understanding of sastra to be the great enemy of progressive Krsna consciousness – thus we sometimes read such statements as:

"… now devotees are blocking the sukrti of many people in the name of following Srila Prabhupada literally."

I have not combed the internet or surveyed multitudes of devotees to discover exactly if many feel this way – I have simply come across the above quotes in recent readings and it has sparked a particular thinking in me and the impetus to write this short essay.

Obviously, even the critic of the 'literalist' must indeed accept some literal meanings in the sastra such as in dharma-ksetre kuru-ksetre – meaning the place of pilgrimage known as Kuruksetra (Gita 1.1). Here a literal reading will take you to a place in North India that many great acaryas have accepted as the place of the Kuruksetra War, where Bhagavad-gita was spoken etc. However, a non-literal reading of the text takes one to the realm of no-Krsna and no-Pandavas. The non-literal interpretation being that Kuruksetra is the body and the Pandavas are the senses, etc. 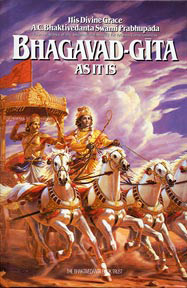 When A.C. Bhaktivedanta Swami Prabhupada wrote his Gita translation and commentary he chose Bhagavad-gita As It Is, for the title – As It Is meaning the literal understanding. He wrote, warning against misinterpretations, "Read Bhagavad-gita as it is. Then you will be benefited."

The literal reading is:

"Abandon all varieties of religion and just surrender unto Me. I shall deliver you from all sinful reactions. Do not fear." Thus the Lord takes all responsibility for one who surrenders unto Him, and He indemnifies such a person against all reactions of sins. (Bhagavad-gita As It Is, 18.66)

Revelation of the substratum, however, reads differently:

"Give up all engagements and come to Me. You won't have to repent, Arjuna, because I am everything to you, and You are everything to Me. This is the most hidden of all hidden truths. What more can I say? And you will find this in Vraja [Goloka Vrndavana]." (The Hidden Treasure of the Sweet Absolute, 18.66)

The two readings of Gita 18.66 are not actually different, but the later gives the devotee a certain solace that a life of surrender leads one to Krsna in His supreme abode of Goloka Vrndavana.

The substratum or hidden truth of sastra is sometimes hidden for a purpose – at least one would think so. One thing is said and on occasion a deeper truth is to be understood. It seems to me that the truth is sometimes hidden to keep it out of reach for those who are unqualified – first deserve, then desire.

But herein lies a problem – who is actually qualified to interpret sastra? Who is actually qualified to understand and enter the substratum? We have often seen how interpretation leads to misinterpretation, especially in the case of the impersonalists and the imitationists. With this consideration in mind one could conclude that the literalist, although meager in his/her depth of understanding is safe, or at least for the time being.

To suggest that the literalist is somehow in a safer position as opposed to the interpreter of sastra is not to say that ignorance is bliss, but such may have its merits. If a great Vaisnava personality such as A.C. Bhaktivedanta Swami Prabhupada was indeed a literalist, as has been suggested, then surely the literal interpretation of sastra must have some intrinsic value in the ultimate search for truth.

My perception is that when one makes a literal reading of sastra one is often faced with the unbelievable, the fantastic – that which mind, intelligence, logic and reason struggles to accept or even totally rejects. Is the literal interpretation of sastra actually blocking or damaging to our progress as some have suggested, or does the literal interpretation call upon something that is greatly beneficial to us? I believe it does. The literal reading of the sastra calls upon our faith, however meager (even blind faith), as the basis of our understanding. The literalist has faith in the sastra and so he/she takes the sastra at face value. Is that a bad thing?

After all, faith is the only sure way to know Krsna, the unknown and unknowable. Knowledge, reason, logic and even our deepest intelligence are unable to capture Krsna. Only our deep faith and surrender can do so.

Srila Sridhara Maharaja used to tell the story of a dream that he once had wherein he saw that all his knowledge of sastra had abandoned him. In his dream he was alone and only his faith remained – that which takes us to the lotus feet of Krsna, beyond the coverings of the material world.

Those who knew Sridhara Maharaja certainly know that he had a vast knowledge of sastra. He had deep realizations, that would make many of us faint. Yet he knew and preached that faith alone was our guide in the infinite.

Some may condemn the literalist as a neophyte, but I personally question such condemnation. Rather than condemn the literal interpretation of sastra, I tend to lean towards a deeper understanding – perceiving it as a building block of faith in the progressive path of Krsna consciousness. Those who condemn the literalists may do better to first learn to believe in the "As It Is" stratum – first acquiring a deeper faith in guru, the Vaisnavas and the sastra before they venture to explore the substratum. Explorer beware! There are tigers in those forests!

When dealing with the higher plane or the deeper substratum, even a little inaccuracy can create great havoc. In such areas the devotee must be very careful not to misinterpret or to offend, because this can completely eliminate one's progress.

At the end of the day we are not interpreters of sastra nor are we literalists – we are harmonists. The harmonist sometimes takes the sastra literally and sometimes not so – endeavoring to penetrate deeper into the world that is Krsna's inner domain.

For the harmonist – faith (sraddha) is his greatest asset – knowledge and the intellect are but bystanders in the endeavor. Saints are the beacons that guide the faith of the harmonist to the land ruled completely by faith.

So let us give the literalists their due credit for taking their stand on faith and not relying on the intellect. And while being taken into confidence by the saints and shown the beautiful world of Krsna's inner domain, let us not become proud of our small brains and finite knowledge, lest we become harmonists in name only. While endeavoring to see the deeper meaning of sastra, are we not to go deeper into the meaning of being a literalist also?