In Bhagavad-gita Krishna says: “ And whoever, at the end of his life, quits his body remembering Me alone at once attains My nature. Of this there is no doubt.”

I used to think of the word 'Alone.', thinking, ' Mmm what does Krishna really mean by that.' Why is He stating, 'Me alone.'? One day the Lord answered my question quite positively.

A close devotee friend and I were talking of experiences in life and which slokas or verses from scripture, or anything Sri Guru had said that really made a deep and lasting impression…Anything that hit us really hard and had more effect than anything else.

The prabhu I was with said, 'Yes, one verse in Gita now sticks with him more than anything else.'……“ And whoever, at the end of his life, quits his body remembering Me alone at once attains My nature. Of this there is no doubt.”…… I asked, 'Why is that'? To which he replied, 'Can I tell you a story, a true happening, a personal experience?' 'Of course ' was my eager response. What follows is an account of that story to the best of my limited memory.

One day my friend and another devotee were traveling through the outback of South Africa. They were visiting farmers and trying to engage them in giving donations to Lord Chaitanya's mission. They were traveling in an old VW van, the other devotee being the driver. It was a long distance between each farm and very often the farms were off the main highway by some considerable distance. It was a very quiet area and very few cars past that way in a day.

As they were driving along, miles from anywhere and no cars or signs of human life in sight for many miles, their van suddenly careered off the road, rolled over, throwing my friend through the passenger door window and onto the ground. To his complete dismay and shock, the van landed on top of him. The devotee who was driving lay unconscious elsewhere. With the van on top of him, his ribs and lungs being crushed he was finding it more and more difficult to breath and the pain was intensifying and becoming unbearable. Periodically losing and then regaining consciousness, he thought to himself, 'This is it! We are miles from anywhere and cars pass this way very rarely. This is it, the end! Time to fix the mind on the Lord.' 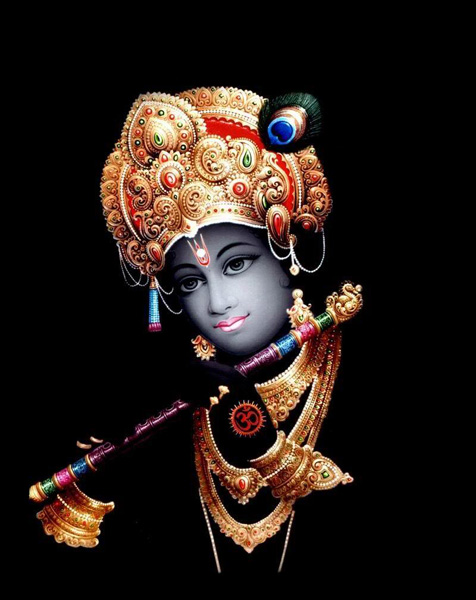 He began to chant in his mind, trying very hard to fix his mind completely on the Lord's holy name. His wife had given birth to a baby girl just not long before, so his mind would go to thinking of his daughter. 'O what will it be like for the her growing up without a father, how will she be cared for and maintained?' His mind would go between the two things back and forth, back and forth. Holy name , daughter, holy name, daughter, like this, on and on. He was finding it very difficult to fix his mind on just the holy name. But also thinking, 'This is it! It's the end! Must just fix the mind on Krsna!' For some time he was in this condition, his mind dwelling on two things, daughter and Krsna. Then it was as if a voice from within called out clearly, saying 'Me Alone! Me Alone!'Me Alone!' He understood that he must now fix his mind on Krsna Alone! No more Krsna and daughter, or daughter and Krsna. He tried so hard now to fix his mind on the Lord. Praying so intensely, but still, thoughts of his baby daughter would be there also. Then he understood that his attachment to his baby daughter was so very strong, much stronger than he had ever understood. He now accepted, that for him it is going to be some time yet before he could fix his mind on Krsna Alone! But now he fully accepted that at the time of death, it has to be Krsna Alone! and not Krsna and daughter, or Krsna and wife, or Krsna and anything else, but just solely and wholely Krsna. Krsna Alone! He felt somewhat sad and disappointed in his inability to fix his mind on Krsna alone. He prayed to the Lord to forgive him and give him the strength and determination to absorb himself, but he also accepted that he was not quite ready to completely surrender. As he lay there crying and praying, with the Lord's instruction, Me Alone! Me Alone! Me Alone! ringing through his heart and mind, a car stopped and the passerby pulled him out from underneath the van and rushed both him and the other devotee to the nearest hospital.

Living to tell this tale he has helped others like myself by telling it. We can see that the Lord wants us to fix our mind on Him Alone.

Please forgive my obvious inability in writing such things.