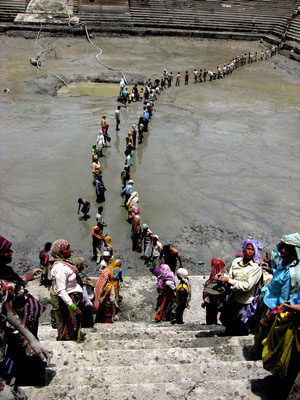 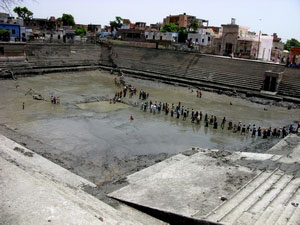 Yesterday we got a call from Radha Kunda that Kankan Kunda has finally been revealed. The cleaning of Radha Kunda had recently been started as Shyama Kunda cleaning is complete. Everyone was anticipating when we would get darshan of the original Kunda excavated by Srimati Radharani and Her sakhis with their golden bangles, kankans. However the pumps that were pumping out the water were getting clogged with mud and each time they got close, they would break down. The poor contractor was at loss what to do as his pumps are made for pumping water not sludge.

I assume on ekadshi night, they finally got success as on dvadasi morning we got the long awaited call. We jumped in Vrinda Devi's car with several devotees and headed on over to Radha Kunda. I was fortunate in 1987 to come with a whole bus load of devotees and, by chance, we got darshan of Kankan Kunda. By the next day, when the devotees came, it had already been covered with water again. So again I was able to take darshan of this most sacred and secret kunda that is very rarely viewed.

In 1987, we all immediately went down the stairs and circumambulated the kunda in calf deep mud. One devotee Ram Roy just whipped on his gamcha and jumped in! This time also I attempted parikrama. On the way down to the kunda, as you can see in the picture, I stepped into a hole up to the end of my thigh! I had no idea how I was going to get out as I'm not so young any more and this was a very difficult position to try and extricate oneself from. There's nothing to grab onto, and no where to put your hands to push up as it is all calf deep mud. And whenever I tried to pull my leg, the mud sucked it back. Slowly wiggling and wiggling, by Radharani's mercy, I got free. Then I continued down to the kund and made my parikrama. 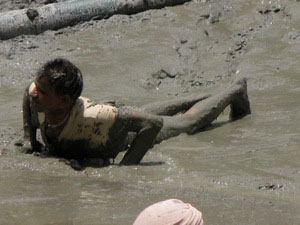 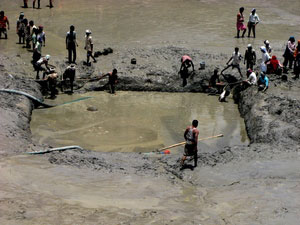 As I was leaving I looked back and saw a couple of fellows were even doing dandavat parikrama! So I'm including a few pictures so that you can relish this event. If you look closely you can see the streams of water coming from the ground and running back into the kunda. They don't seem to be flowing so intensely like in 1987, maybe because now it is hot season, so darshan my remain available for a couple more days.