Why did a film like Slumdog Millionaire, which conveys an utterly negative image of India's slums, exploitation, poverty, corruption, anti Muslim pogroms create so many waves in the West, pre and post Oscars? And why does not the Indian government protest, as the Chinese would indeed have, for a twisted and perverted portrayal of its own reality? There are several answers: When the missionaries began to evangelize India, they quickly realized that Hinduism was not only practiced by a huge majority, but that it was so deeply rooted that it stood as the only barrier to their subjugating the entire subcontinent.

They therefore decided to demonize the religion, by multiplying what they perceived as its faults, by one hundred: caste, poverty, child marriage, superstition, widows, sati Today, these exaggerations, which at best are based on quarter-truths, have come down to us and have been embedded not only in the minds of many Westerners, but also unfortunately, of much of India’s intelligentsia.

We Westerners continue to suffer from a superiority complex over the so called Third World in general and India in particular. Sitting in front of our television sets during prime time news, with a hefty steak on our table, we love to feel sorry for the misery of others, it secretly flatters our ego and makes us proud of our so-called achievements.

That is why books such as The City of Joy by Dominique La Pierre, which gives the impression that India is a vast slum, or a film like Slumdog Millionaire, have such an impact.

In this film, India’s foes have joined hands. Today, billions of dollars that innocent Westerners give to charity are used to convert the poorest of India with the help of enticements such as free medical aid, schooling and loans.

If you see the Tamil Nadu coast post tsunami, there is a church every 500 meters. Once converted, these new Christians are taught that it is a sin to enter a temple, do puja, or even put tilak on ones head, thus creating an imbalance in the Indian psyche. In an interview to a British newspaper, Danny Boyle confessed he wanted to be a Christian missionary when he was young and that he is still very much guided by these ideals. So much for his impartiality.

Islamic fundamentalism also ruthlessly hounds India, as demonstrated by the 26/11 attacks on Mumbai, which are reminiscent of the brutality and savagery of a Timur, who killed 1,00,000 Hindus in a single act of savagery.

Indian communists, in power in three states, are also hard at work to dismantle India's cultural and spiritual inheritance. And finally, the Americanization of India is creating havoc in the social and cultural fabric with its superficial glitter, even though it has proved a failure in the West. Slumdog plays cleverly with all these elements.

Many of the West’s India-specialists are staunchly anti-Hindu, both because of their Christian upbringing and also as they perpetuate the tradition of Max Mueller, the first ˜Sankritist who said: “The Vedas is full of childish, silly, even monstrous conceptions. It is tedious, low, and commonplace, it represents human nature on a low level of selfishness and worldliness and only here and there are a few rare sentiments that come from the depths of the soul”.

This tradition is carried over by Indologists such as Witzel or Wendy Doniger in the US, and in France where scholars of the state-sponsored CNRS, and its affiliates such as EHESS, are always putting across in their books and articles detrimental images of India: caste, poverty, slums and more than anything their pet theories about Hindu fundamentalism.

Can there be a more blatant lie? Hinduism has given refuge throughout the ages to those who were persecuted at home: the Christians of Syria, the Parsees, Armenians, the Jews of Jerusalem, and today the Tibetans, allowing them all to practice their religion freely.

And finally, it is true that Indians, because they have been colonized for so long (unlike the Chinese) lack nationalism.

Today much of the intellectual elite of India has lost touch with its cultural roots and looks to the West to solve its problems, ignoring its own tools, such as pranayama, hatha-yoga or meditation, which are very old and possess infinite wisdom.

Slumdog literally defecates on India from the first frame. Some scenes exist only in the perverted imagery of director Danny Boyle, because they are not in the book of Vikas Swarup, an Indian diplomat, on which the film is based. In the book, the hero of the film (who is not Muslim, but belongs to many religions: Ram Mohammad Thomas) does not spend his childhood in Bombay, but in a Catholic orphanage in Delhi. 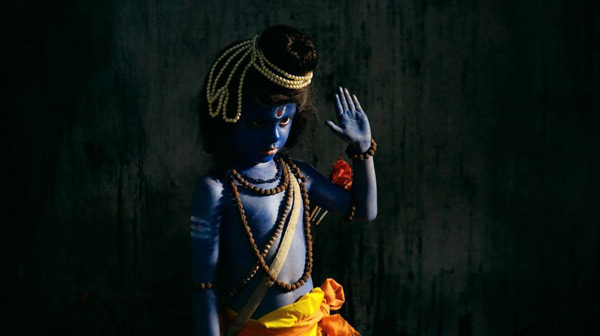 Jamal’s mother is not killed by Hindu fanatics, but she abandons her baby, of unknown religion, in a church. Jamal’s torture is not an idea of the television presenter, but of an American who is after the Russian who bought the television rights of the game. The tearful scene of the three children abandoned in the rain is also not in the book: Jamal and his heroine only meet when they are teenagers and they live in an apartment and not in a slum.

And finally, yes, there still exists in India a lot of poverty and glaring gaps between the very rich and the extremely poor, but there is also immense wealth, both physical, spiritual and cultural much more than in the West as a matter of fact.

When will the West learn to look with less prejudice at India, a country that will supplant China in this century as the main Asian power? But this will require a new generation of Indologists, more sincere, less attached to their outdated Christian values, and Indians more proud of their own culture and less subservient to the West.