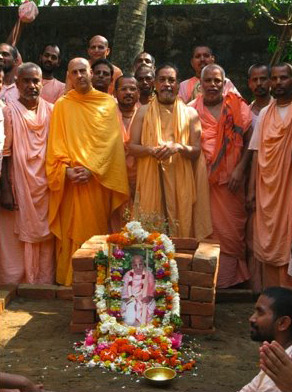 At 9pm IST on March 3, 2009, Srila Bhakti Vaibhava Puri Goswami left this world at Vishakhapatnam, Andhra Pradesh, where he had been brought for medical treatment. He had just reached his 96th year two months before.

Known as Puri Maharaja by devotees and followers, B.V. Puri Goswami was one of the most notable Gaudiya Vaishnava teachers of the 20th century.

Born in the village of Fulta in Orissa as Nrsimha, he was active in Mahatma Gandhi’s independence movement in the 1930s, before taking initiation from Bhaktisiddhanta Sarasvati Thakura in 1936. Three decades later, in 1966, he accepted the sacred renounced order of sannyasa, and formed the Sri Krishna Chaitanya Mission in June of the same year.

His Chaitanya Mission has since expanded to eighteen ashrams in India, with Sri Chaitanya Chandra Ashram in Puri considered to be the flagship. The Mission also has a world-wide following, with the recent establishment of Sri Sri Radha Govinda Mandir in Vienna, Austria.

Puri Maharaja avoided leaving India for many years, but in the late 1990s, he began to tour his message around the world. By his first full world tour in 2001, he had reached the advanced age of 89.

Puri Maharaja had a deep relationship with ISKCON Founder Srila Prabhupada that dates back to 1942, when he spent a year at Prabhupada’s (then Abhay Charan) house in Calcutta as a servant of the late B.R. Sridhara Swami.

Prabhupada kept in touch with Puri Maharaja throughout the years, even confiding in him his difficulties while trying to spreak Krishna consciousness in the western world. “My Dear Puri Maharaja,” he wrote in a letter dated December 2, 1970, “Perhaps you are my only godbrother who has appreciated my humble service to the cause of Guru Gauranga.”

In 1971, Puri Maharaja invited Srila Prabhupada to attend the openings of his new ashrams in Vishakhapatnam and Rajahmundry, Andhra Pradesh. Prabhupada obliged, attending them with a group of disciples including Tejiyas, Hansadutta, and the late Tamal Krishna Goswami.

In November 1974, Puri Maharaja lectured along with Prabhupada’s disciple Achyutananda at an ISKCON-organized public program in Rajahmundry.

Puri Maharaja often cared for ISKCON devotees as if they were his own spiritual children. When 150 ISKCON devotees took the tough two-day trip from Calcutta to Hyderabad after the 1975 Mayapur festival, Puri Maharaj arranged food for the entire group at Rajahmundry train station.

ISKCON devotees present then remember him with fond respect. “The last time I spent ‘significant time’ with Srila Prabhupada was when I brought Puri Maharaj to Mayapur during the 1977 Mayapur festival, and sat with them both while they conversed in Bengali for an hour or so,” recalls Basu Ghosh Dasa, temple president at the ISKCON temple in Baroda, Gujarat. “Prabhupada had a lot of affection for Puri Maharaja.”

Puri Maharaja continued to show his own affection for Srila Prabhupada in later years, speaking at ISKCON’s Krishna Balarama Mandir temple in Vrindavana every year on the occasion of Prabhupada’s disappearance from this world.

“He spoke candidly and fearlessly, and his words were full of praise for Prabhupada,” Basu Ghosh says. “Puri Maharaj was a tireless teacher of Sri Chaitanya’s mission and will be deeply missed.”