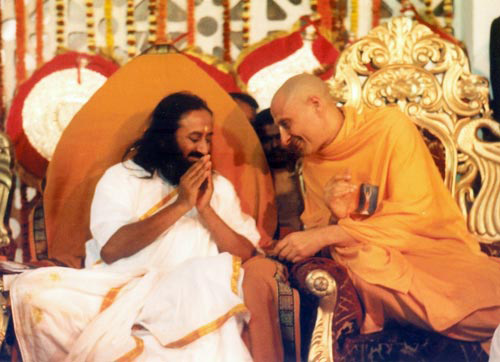 On Sunday February 15th, more than six thousand people participated in the "Prema and Bhakti Sammelen," in Kolkata, an all-day forum in honor of Sri Caitanya Mahaprabhu, India's 16th Century saint and avatara. The event was organized by the People's Forum for Mahaprabhu. Invited representatives from organizations across India participated. The Forum was the first of many expected activities this year, leading up to 2010. That year will mark the 500th anniversary of Mahaprabhu's accepting sannyasa, or the renounced order of life, when he officially launched his religious movement.

Other Vaishnava orders-and even impersonalist sects that do not accept the monotheistic conclusions of the Vaishnavas-also admire Mahaprabhu of one of India's great modern saints and innovative spiritual teachers. Thus, even leaders of the Rama Krishna Mission, and other non-Vaishnava organizations, were in attendance.

Center stage and the highest seats of honor at the event were reserved for Sri Soham Baba, Pandit Ravi Shankar, and Radhanatha Swami Maharaja. The three spoke one after another in glorification of Caitanya Mahaprabhu's life, as well as his spiritual and social contributions.

ISKCON's Radhanatha Swami, like other leaders present, spoke for fifteen minutes. He explained to the audience that Mahaprabhu's acceptance of sanyasa was motivated by his compassion for those souls who have forgotten their relationship with God. Mahaprabhu is reputed for leaving a comfortable family life to travel across India inspiring the thousands who thronged to him wherever he went to chant the names of God, and thus achieve self-realization, and prema, or love of God.

"We should imbibe the mood and spread the legacy of Mahaprabhu," Radhanatha Swami told the crowd during his mid-day talk. "Mahaprabhu's instruction was for everyone to chant the names of God, and become happy."

Other speakers emphasized that the teachings of Mahaprabhu are especially appropriate for the present age.

Afterwards, Sri Ravi Shankar met privately with Radhanatha Swami. They discussed the need to help Indian retain its spiritual culture despite the pressures of modernity and other global influences.