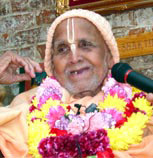 This is very sad to write you that His Divine Grace Srila Gurudev Bhakti Vaibhav Puri Goswami Maharaj left this planet just 5 minutes before at Vishakhapatanam. Now they are bringing his body to Puri for His Samadhi.

Our Spiritual Master Srimad Bhakti Vaibhava Puri Goswami Maharaj appeared on the 5th day of the waning period of the moon of Magha in 1913, in the house of his grand-father, in the village Fulta, which is 5km away from Berhampur in Ganjam District of Orissa State in India, Bharata Varsha, the most sacred place in the world. His mother’s name is Srimati Devi and his father’s name is Sri Damodar. Maharaj was then named as Sri Nrsingha by his beloved parents.

Maharaj has completed his higher education in Berhampur and received his B.A. degree. He was noble, truthful and not envious from his student career. Gradually he developed interest in Ayurveda and decided to learn it. He successfully completed his study about Ayurveda from the renowned Kaviraj Sripad Madhusudan Shara who took initiation from Srila Bhakti Siddhantha Saraswati Prabhupada. At the encouragement of Sripad Madhusudhana Shara our Maharaj received his initiation from Srila Bhakti Siddhanta Saraswati Goswami Prabhupada, on 3rd August, 1936, the advent day of Lord Balaram in Sridham Mayapur.

From 1937-1942 Maharaja was incharge of Kowur Gaudiya Math. From 1942-1948 he stayed at Mayapur and in 1966 he took sannyas from Srila Bhakti Swarup Giri Maharaj and later formed The present Sri Krishna Chaitanya Mission.

Srila Maharaj used to come into trance with full of tears in his eyes while narrating the pastimes of Gauranga or commenting on the verses of Srimad Bhagavata. He did with utmost care the service to Tulsi, circumambulating the temple of the Lord, worshipping the deities or singing the glories of the Lord.

Srila Maharaj was very affectionate to his disciples. He was always eager to dispel their doubts. He would ask them how they chant, what they feel and so on! He never disrespected others. He would never tolerate any kind of disrespect to others.

Srila Maharaj had a great power to deliver speeches without a pause in Oriya, Telugu, Hindi, Bengali and English languages. His listeners were wonderstruck by hearing his speech.

Visits Abroad In His Pursuit Of Preaching

Maharaja went on tour several times, visiting Europe and America as per request of the foreign devotees and delivered devotional discourses on unalloyed devotion in the religious meetings arranged in Temples, Schools, Colleges, Universities and public places.

The founder Acharya of ISKCON, Srila A.C. Bhakti Vedanta Swami Maharaj (Our Guru Maharaj calls him affectionately as ‘Swami Maharaj’) was an intimate friend of our Maharaj.