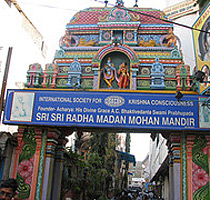 A seven-hour protest in front of the Hyderabad collectorate in Abids on Wednesday won a temporary reprieve for the authorities of the International Society for Krishna Consciousness (Iskcon), Secunderabad, temple. They have got an assurance from Hyderabad collector Navin Mittal that the district administration would not touch the temple land "till the issue is settled".

Hundreds of vehicles were up caught in a traffic jam after the devotees blocked both sides of the Nampally road. They sat on the road and chanted `Hare Krishna, Hare Ram'. There were some tense moments when the petitioners and the devotees had a verbal duel at the collectorate.

"The collector gave an assurance that the temple's land will be not be touched until the issue is settled. The issue has been delinked from other land acquisitions in the area," Iskcon national member Satya Gopi Das told the media.

The collector said, "We have de-linked the Iskcon land issue as it is a sensitive one. Our intention is not to hurt the religious sentiments. The notices have been issued under Section 4 (1) (2) of the Land Acquisition Act, which a preliminary one. The final notices will be served after completion of an inquiry scheduled for December 12," Mittal added.