Last evening was Rama Vijayotsava or the day that Lord Rama killed Ravana, also popularly know as Dasshera. Every year on this evening in Radharama Mandir, Sri Sri Radharamanji triumphantly rides on a very large silver elephant. I am sending a few pictures for you all to relish this wonderful once-a-year darshan of the Deity served by Gopal Bhatta Goswami.

For those who have never been to Vrindavan or are unfamiliar with Sri Radharamanji, He was originally one of twelve Salagram Shilas that Gopal Bhatta Goswami accidently picked up when he scooped up water with his lota to take bath in the Gandhaki River in Nepal and Muktinatha, the place where all such shilas originate. He returned with Them to Vrindavan and was worshipping Them and lamenting that the other Goswamis had beautiful Deities to worship with clothes, crowns, and jewelry. Then one of the shilas known as Damodara self manifest as the exquisitely enchanting Deity of Radharamanji. 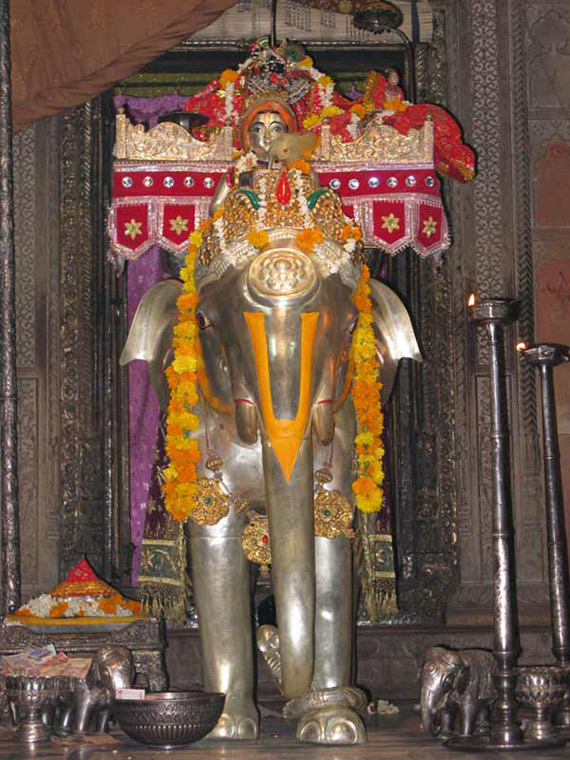 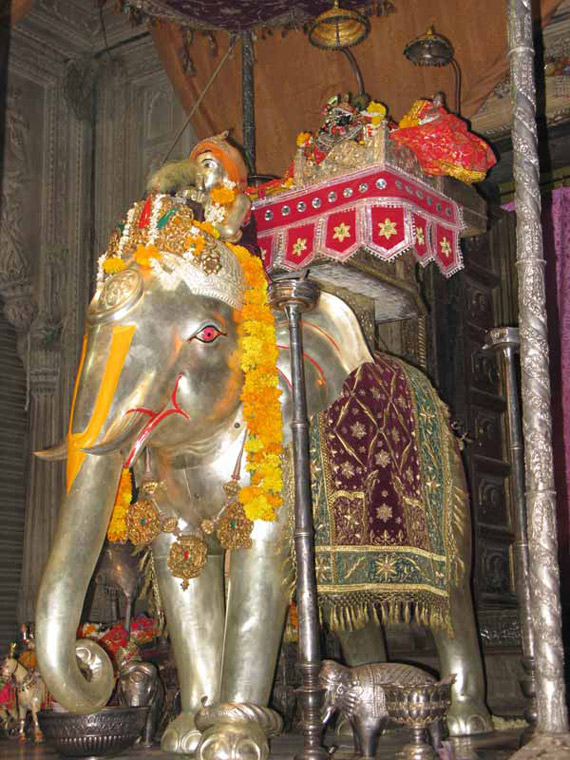 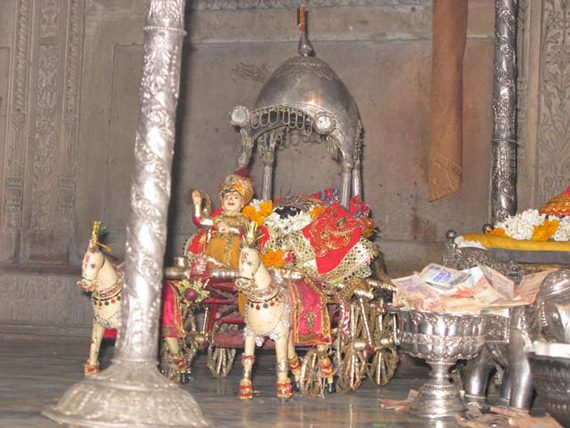 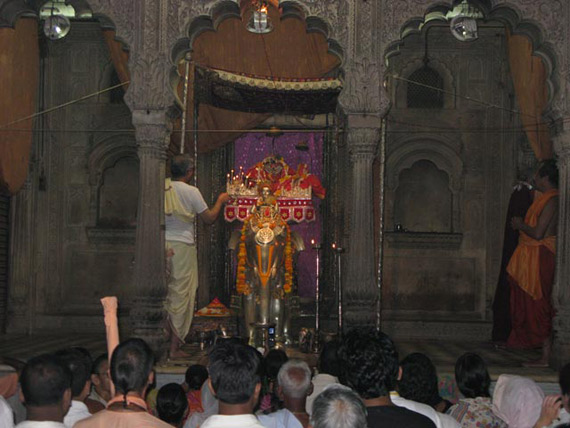 In the first picture, you can appreciate the size of the silver elephant and the beautiful throne carried on his back. Next you can get darshan of Sri Sri Radharamanji gloriously sitting on His colorful throne. Then you can relish a nice close up of His Lordship.

I took the next picture from the side so that you can appreciate the lovely decorations and astonishing eye of our amazing silver pachyderm. Then from front on, I was trying to get a picture of one of Gopal Bhatta' Salagrams who was riding in a ornate ratha. I was holding the camera well over my head, hoping to get a glimpse of Salagram Maharaja. One of the younger Goswamis, who was also there with his camera, gently pulled me to the middle of the altar and showed me how I could get a nice view of Him. However in this picture, you see the view blocked by one silver pole holding up the canopy over the whole scene, but you can easily spot Salagram Maharaja with his two conchshell eyes riding in the chariot. So now that you know where to look, in the next photo you are able to get a nice view of the ratha and barely make out one of His eyes.

Lastly while we were there, arati began so in the last picture you can view the ornately carved temple and see the special long ghee wicks that are used in Radharaman Mandir. After the arati, the many young goswamis came and enthusiastically sang the arati song of Radharamanji, whose refrain is as follows:

With great emphasis on the Jaya that starts the second line. It was a very enchanting evening so I thought I would share it with you all.

In service of Srimati Vrinda Devi,