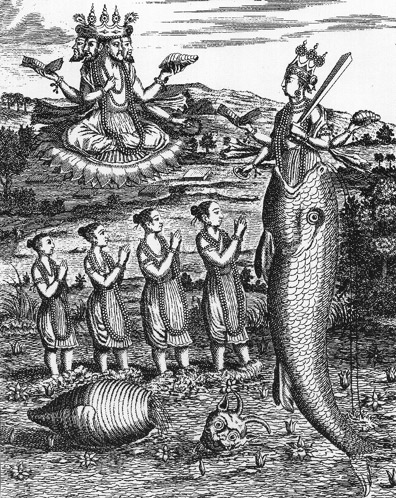 Bulgarian folk songs from pre-historical and pre-christian time, discovered in Thrace and Macedonia and published by Stefan I. Verkovich in 1874.

The author has been collecting these songs for more than 10 years from 2 main regions:

These tribes live in the most isolated places and despite all changes of time, somehow or other, they have saved their authentic folklore. They have a small idea of Christianity. And others know some Muslim prayers but basically they continued to follow their original tradition.

In that book there are a couple of songs about Krishna, Vishnu, Siva, Orpheus etc. One of them is from a village named Eleshnitsa, East Macedonia, nowadays Greece:

The Birth of Orpheus

“An old king was praying:
Oh, Great God, Vishnu
Please give me oh, God
a child in my old age.
Let me see him and then I die,
Let him inherit my land…

Later, a saintly person came down from the sky and said predicting:

“You’ll have a son from heaven,
he’ll glorify Lord Vishnu with his flute.
This child will have all good qualities,
He’ll pacify all lands and mountains,
He’ll be the king of the earth.”
The saintly man said all that,
and flew back in the sky
to glorify Lord Vishnu
who’s performing His miracles on earth.

Verkovich had collected 56 songs and they published only 15. Later he selected the best from the unpublished songs and sent them to the French Consul in Plovdiv (August Dozon) and he published them as “Unpublished Bulgarian Folk songs” – “Chanson populaires Bulgares inedites” Paris, 1875. They are now found in the archives of the Bulgarian Academy of Science. There is another interesting song about Orpheus, who was heartbroken after his wife’s departure. It consists of 462 lines. Here are a few of them:

Orpheus was wondering why and how she disappeared and a voice from the sky told him:

…“It is not done by Lord Siva,
but it is done by Lord Vishnu
…“Dana became a servant of Vishnu,
servant for three years.”

Although he understood this, he had a strong desire to see her and he started praying:

“Oh, my dear Lord Vishnu
I’m praying unto You
You are my only shelter!”
Orpheus is humbly praying
And Lord Vishnu hears him

Vishnu mercifully fulfills his desire and He takes him back in His palace in the upper sky.

By the way the name VISHNU is mentioned hundreds of times in all of the songs and he’s always depicted as the Supreme Lord (Gulema Boga). There are other interesting songs about Siva, Durga, Surya, Agni, etc.

Atheists and communists call them mythology or mystification… Christians condemn it as paganism – and therefore the Bulgarian Ministry of Education rejected their publication until 1997. But the serious scientists agree and confirm that they are authentic and are pre-christian.

Krishna is not mentioned in the songs about Orpheus, but he appears on the pages of Veda Slovena under the name Kolada, which means the young or little Krishna named Krusni, the cowherd boy, who became the king of the earth.

60 Lines about Krishna from Volume 2 of Veda Slovena:

A prophet in his fancy palace,
Sings an ancient book for him.
And the ancient book is saying,
That I will bear a male kid.

The king is really angry
Angry – really mad!
He threw me in the prison,
And will cut me bit by bit

“My old mother in the woods,
In the woods of Vida,
Gave birth to a shiny son,
And His name is Krishna.
And the king he does
Want to chop her son.”

Krishna, my cowherd boy,
Tends gray herds, oh my,
And he’s singing Veda book,
Charming all the goddesses in wood.

Then he walks down at the ring,
At the challenge of the king.
After a very terrifying fight,
With a stick He showed his might.

And he conquered the court.
Krishna – young king of the world,

Populated the desert land,
The desert land before the end,
Where no one has ever been.
Neither birds do fly nor sing.

By then Krishna never wedded,
He’s omniscient and divine.
He’s the Knower of the Veda,
Krishna sings it all the time.

he defeated the evil king,
and took over his nice courts.
Krishna – my young Lord!

Went where no one else has been,
Desert land no one has seen.
To populate that wasted land,
Which is just before the end.

Krishna lived for many years,
But His Soul did never leave,
He rose to heaven – as He is,
Beyond the sky is where He lives.

Oh, my Lord omniscient and divine!
Young girls gathered,
Gathered in the palace,
And they sang a song,
And it stayed forever.