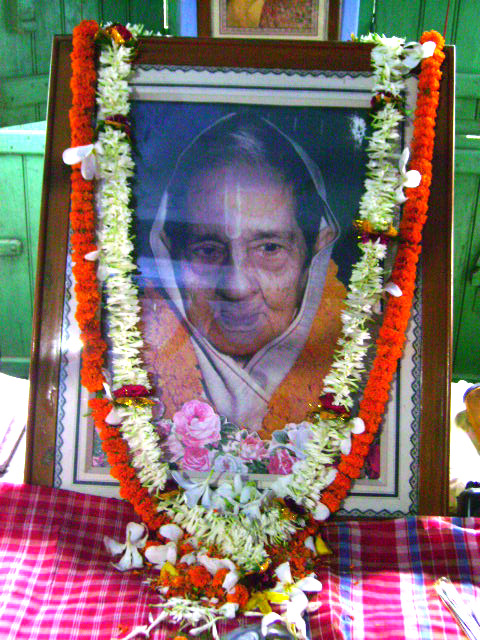 July 12th in the sacred land of Nabadwip has commemorated the 110th appearence day of a great Vaishnavi of our recent time, Srimati Krsnamayi Didi. The mahotsava festival took place at Jahnava Didi’s house, a younger godsister and personal servant of Krsnamayi Didi. Locals and foreigners filled up all the house to postrate their obeisances to this great soul. She was the elder and senior woman’s disciple of Pujyapada Srila Bhakti Raksak Sridhara Dev Goswami Maharaj and had been present in the math since 1940’s. She could experience the association and service to Srila Bhakti Vedanta Swami Prabhupada, a dear godbrother and close friend of his Gurudeva.

Once, Srila Bhakti Vedanta Swami Prabhupada came to the Caitanya Sarasvata Math, was precisely 1976. Srila Bhakti Raksak Sridhara Dev Goswami Maharaj was very happy that he came. At that time, Krsnamayi Didi was cooking and Srila Sridhara Maharaj told her to cook very nicely. He said, ‘ Do not use chili. Swami Maharaj and many of his devotees are coming, so you must cook your very best.’ Krsnamayi Didi made special preparations that her Guru Maharaj had directed her to make. ‘You cook puris and bodi charchuris (potatoes and mung bodis cooked with mustard oil, turmeric and salt).’ He knew that Swami Maharaj liked this very much. After cooking the lunch, Krsnamayi Didi distributed the prasada to everyone. The other disciples of Swami Maharaj took prasada downstairs and the two godbrothers took upstairs. When Swami Maharaj Prabhupada came down by the kitchen after taking prasadam, he told Krsnamayi Didi how pleased he was.

At this time, Srila Sridhara Maharaj’s sister, Rama Didi, was upstairs listening to the hari katha that Srila Swami Maharaj and Srila Bhakti Raksak Sridhara Dev Maharaj were speaking. Srila Sridhara Maharaj told his sister, ‘Oh, you listen very carefully to the hari katha from Swami Maharaj. Then sometime you can also go to America to preach along with him.’

Srimati Krsnamayi Didi was good friends with Pisima Didi (Srila Prabhupada’s sister, Bhavatarini). They knew each other for many years and she very much liked Bhavatarini Didi, who also came to Caitanya Sarasvata Math to visit her.

Didiji was very but very dear to all who met her. She was the embodiment of humility and servitude to the vaishnavas and the Supreme.

All the glories to this divine soul of Lord Sree Krsna. May she bless all of us to reach pure devotion to Sri Sri Guru and Gouranga!