The Two most astonishing things for the British who invaded India were:

The then Governor of British India Robert Clive made an extensive research on the agriculture system in India.

The outcome of the research was as follows:

1) Cows were the basis of Indian agriculture and agriculture in India cannot be executed without the help of cow.

2) To break the Backbone of Indian agriculture cows had to be eliminated.

The first slaughterhouse in India was started in 1760, with a capacity to kill 30,000 (Thirty thousand) per day, at least one crore cows were eliminated in an years time. 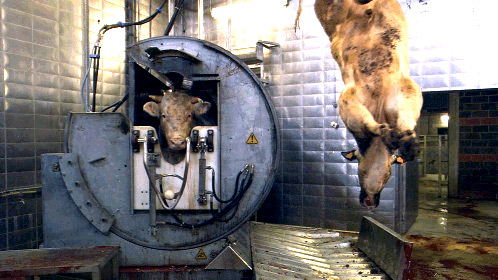 As a part of the Master plan to destabilize the India, cow slaughter was initiated.

Once the cows were slaughtered, then there was no manure and there is no insecticide like cow urine.

Robert Clive started a number of slaughter houses before he left India.

A hypothesis to understand the position of Indian agriculture without slaughter houses:

In 1740 in the Arcot District of Tamil Nadu, 54 Quintals of rice was harvested from one acre of land using simple manure and pesticides like cow urine and cow dung.

As a result of the 350 slaughterhouses which worked day and night by 1910. India was practically bereft of cattle. India had to approach England's doorstep for industrial manure. Thus industrial manure like urea and phosphate made way to India.

After India attained independence in the name of "Green Revolution" there was extensive use of industrial manure.

To one of the questions Gandhiji answered, that the day India attains Independence, all the slaughter houses in India would be closed.

In 1929 Nehru in a public meeting stated that if he were to become the prime minister of India, the first thing he would do is to stop all the slaughterhouses.

The tragedy of the situation is since 1947 the number has increased from 350 to 36,000 (thirty six thousand) slaughter houses.

Today, the highly mechanized slaughterhouses Al-kabir and Devanar of Andhra Pradesh and Maharastra has the capacity to slaughter 10,000 (ten thousand) cows at a time.

It's a warning signal to one and all in India to rise to the occasion.