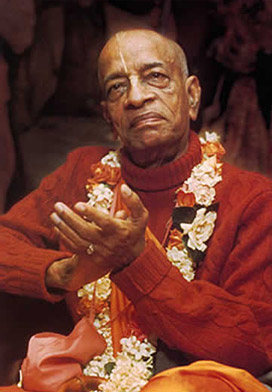 "The ecstasy behind Srila Prabhupada's kirtana led him to believe that the whole world could be spiritually transformed in a matter of days, and by the power of his prema, we believed him!"

Q. I read that Krsna is directly involved in the lives of devotees, but if that is the case then why did he allow so many of Srila Prabhupada's dear and dedicated disciples to give up their spiritual practice (sadhana)?

A. Krsna is directly involved in the lives of his devotees; however, just as there is a gradation in devotion from the neophyte to the superlative devotee, so too is Krsna involved to a greater or lesser extent in his devotees' lives. In other words, if one is neglecting his instructions and thus chanting offensively (namaparadha), how much is Krsna directly present in the life of such a devotee's life? Furthermore, the fact that Krsna is present in the lives of his devotes does not mandate that they can never fall from their practice. Neophyte devotees are struggling between their material desires and their desire to serve Krsna, and sometimes they fall short and succumb to those material desires. If this causes them genuine remorse and they renew their sadhana, then in Krsna eyes this reinstates them, so says Srimad Bhagavatam 11.10.28. In this regard, once Srila Prabhupada was asked why so many big devotees among his disciples had fallen down, to which he replied, "Big devotees do not fall down." Furthermore, apparent fall down is sometimes a necessary part of one's spiritual progress, as the journey home, back to Godhead, is more often than not a long and winding road.

Q. I am reading about astrology and how it affects our lives. The evidence shows that even pure devotees act according to their charts. In other words the spiritual merits of great souls are revealed in their astrological charts. If everything is predetermined, as seems to be indicated by astrology, then how is it that Krsna is involved in the daily lives of his devotees?

A. The fact that astrology appears to outline the spiritual lives of even great devotees does not mean that Krsna is not directly involved. The lives of great devotees are conducted under the influence of Krsna's internal energy (svarupa-sakti), not his external energy (maya-sakti), daivim prakrtim asritah. One may study Krsna's astrological chart or that of Sri Caitanya Mahaprabhu and find many future events indicated, but does this mean that Krsna is not independent or that his actions are performed under the influence of his maya-sakti? Certainly not! Scripture states that even in the spiritual world (Goloka) there are gods and goddesses, stars in the sky, and astrological charts that devotees' lives conform to. Such is the nature of the pastimes of the sweet Absolute. As Bhagavad-gita explains, the gods and goddesses governing the stars are not independent, as they require Krsna's sanction to bless or condemn. The demigods' influence in the lives of great souls, as indicated in their astrological charts, represents merely one of the agencies through which Krsna displays his pastimes and expresses affection for his devotees.

Q. Srila Prabhupada often preached that one should not look for faults in devotees, saying that we should become like bees searching for honey and not like flies attracted to stool. My question is how can we reconcile this idea with the possibility that by ignoring faults we may lose our power of discrimination?

A. Scripture teaches that we should not look for faults in others, especially devotees. Fault finding, however, is different from constructive criticism in that it contains no good will. While constructive criticism may appear to be dwelling on another's faults, the spirit underlying it is one of compassion, and the desire to help another improve. When we are advised to be like bees as opposed to flies, this does not mean we should cast discrimination aside. It means that rather than dwelling on another's faults we should discriminate and try to dwell on his or her good qualities, unless of course we are spiritually advanced enough to actually help such a person with constructive criticism.

It should be stressed that not every devotee has the spiritual power to constructively point out the faults of another in such a way that the person will be truly benefited and encouraged to improve. Those who have such spiritual power may show mercy to even those whom lesser-qualified devotees consider irredeemable, as Sri Nityananda did in the case of the drunkard Madhai. If we do not have such power, it is best to consult with a higher devotee when we notice troubling faults in others. In this way we will develop a penchant for taking shelter of advanced devotees. Devotees who are actually advanced can change the world. We need but to serve them and thereby change ourselves.

Q. Previously you discussed the idea of honoring devotees from a distance. Is this not ultimately the position of an intermediate devotee (madhyama adhikari), rather than that of the superlative devotee (uttama adhikari)? I mean a madhyama is still cultivating his devotion, so he must be sensitive to negative influences, whereas an uttama or perfected devotee need not be so concerned. My point is that Srila Prabhupada, being an uttama adhikari, never took this position. He freely gave his divine association to the hedonistic youth of the 60's and doing so turned many of them into devotees. That considered, could you please elaborate on the difference in vision between the madhyama and uttama adikaris in regards to "honor from a distance."

A. Madhyama adhikaris, or intermediate devotees, are characterized by discrimination. Thus they avoid certain types of association and embrace other types in pursuit of their own progress. The Bhagavata (11.2.46) states:

"An intermediate devotee is one who cultivates love for God (prema), is a friend of all devotees, shows mercy to ignorant people who are innocent, and avoids those who are envious."

Uttama adhikaris, or superlative devotees, on the other hand, are characterized by an apparent lack of discrimination that causes them to see all beings within God, or moving under God's will. They see only the potential inherent in all beings to be engaged in Visnu-bhakti.

"Anyone who sees God within everything, everything within God, and everything in relation to God is a superlative devotee." (SB 11.2.45)

Sri Jiva Goswami has cited the Bhagavata 10.35.9 to explain the meaning of the above verse about superlative devotees, and through the pen of Sri Krsnadasa Kaviraja, Mahaprabhu also did the same. Verse 10.35.9 says:

"The creepers and trees of the forest, their branches weighed down by rich coverings of flowers and fruits, seemed to manifest Lord Visnu within their hearts. Exhibiting eruptions of ecstatic love upon their bodies, they poured down rains of honey."

Mahaprabhu also cited the above Bhagavata verse to Sri Sanatana to substantiate that that all beings, moving and nonmoving, have the potential to engage in bhakti when graced by Sri Krsna. Before citing this verse, he said:

"The bhajana of Vyasa, Suka, the Kumaras, etc., is well known. Now hear how the ignorant and nonmoving beings also worship Krsna."

This verse Mahaprabhu refers to (SB 10.35.9) was spoken by the gopis. Here they see even the trees as devotees in whose hearts Krsna is seated. They are not preaching to the trees to become devotees. They are marveling at how much more devotion the trees have in comparison to themselves. Because their hearts are full of prema, they see others as if they too had such prema. Yet, although they see prema in everything and everyone, they do not see it in themselves.

Regarding honoring from a distance those whose association is not favorable, in light of the above verse there appears to be little scope for this in the lives of superlative devotees. Indeed, the gopis are longing for association with others (even ignorant and nonmoving beings) into whom they have projected their own prema! They see prema in everyone and thus they see Krsna in everyone, for Krsna is found only in prema.

However, when the same gopis appear in this world as devotees such as Sri Rupa, Sanatana, and so on, we see that they exercise discrimination, even avoiding certain kinds of devotee association. Even Sri Caitanya Mahaprabhu himself avoided inappropriate association with both the opposite sex and worldly persons, and spoke strongly against such association. Sri Caitanya-caritamrta describes how he refused to give audience to even the devoted Raja Prataparudra, yet when Mahaprabhu was in ecstatic trance he allowed a woman to climb on his shoulders when she wanted to see the smiling face of Lord Jagannatha in the temple. Later Mahaprabhu embraced Raja Prataparudra when he came to him disguised in the dress of a mendicant and recited Gopi-gita of the Bhagavata, causing Mahaprabhu to lose external consciousness.

Thus we find that to a large extent superlative devotees conduct themselves in this world in much the same way as advanced intermediate devotees do. The difference is that sometimes in ecstatic trance they lose sight of discrimination and decorum in ways that may benefit others who might otherwise not get their association. However, even when steeped in trance they may also discriminate in a higher sense, as does Bhaktivinoda Thakura when he writes that he does not want to see the face of those who in any way are opposed to the service of Sri Radha. Similarly, Sri Raghunatha dasa Goswami said that he would not take yogurt from any gopis coming from the village of Candravali, Sri Radha's chief competitor.

Srila Prabhupada was not different. Although it is true that he shared himself with fallen souls, the likes of which other sannyasis dared not associate with, he also avoided the association of those (even devotees) who could not recognize his contribution. He thus respected them from a distance. At the same time, the ecstasy behind Srila Prabhupada's kirtana led him to believe that the whole world could be spiritually transformed in a matter of days, and by the power of his prema we believed him! The discriminating would perhaps differ with this position. Then again, perhaps he was right. Such is the power of love.

In conclusion, both intermediate and superlative devotees who are functioning in this world as intermediate devotees embrace the downtrodden. However, they do this in the consciousness of seeking to help them advance in spiritual life. They also teach by their example that sometimes we have to respect others from a distance.