We have taken the beginning of kali yuga as the fixed point to determine the chronological dates of the events, kings, Divine dignitaries and the important personalities of our history. It is a common understanding that kali yuga started about 5,000 years ago (in round figures) and we never had any problems in the past in accepting this fact. But only after the arrival of the English people in India, all sorts of baseless criticisms started regarding our history and religion that were promoted and fostered by them. We had hundreds of such evidences regarding the date of Mahabharat war and the beginning of kali yuga in our history books that were destroyed by the British, still we have more than enough material to fully establish this fact.

We have three eras: Kali era, Vikram era and (Shalivahan) Shak era. Before Vikram (57 BC) and Shak era (78 AD) we had Kali era, which was astrologically fixed as 3,045 years before Vikram era. All the acharyas, Jagadgurus and the people of Bharatvarsh accepted it. If there was any mistake, our Jagadgurus must have pointed it out, but they didn't. In that case there seems no point for a gentleman to dispute with that.

(a) We still follow the ancient astrological tradition. There is a most prestigious, 48 page detailed date-wise journal (panchang with all the astrological facts and figures called "Vishva Panchangam," established in 1925 and published by Kashi Hindu Vishvavidyalaya (Benares Hindu University), Varanasi. It gives all the three eras: Kali era, Vikram era and (Shalivahan) Shak era.

It is as thus: 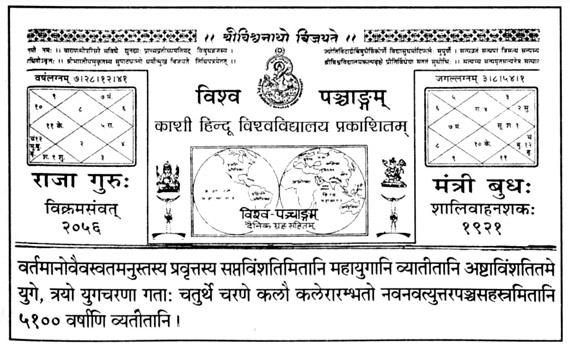 (b) Another panchang of India called "Shree Saraswati Panchangam" published from Navalgarh, Rajasthan, also gives all the calculations and says that 5,100 years of kali yuga had already elapsed before 1999.

Thus, the best team of the scholars of astrology all over India give the same figures of 3102 BC and publish it in the panchang (journal) every year.

These astrological journals are run by a group of the most learned astrologers of India, and thus it is mindlessness if any astrologer or scholar unnecessarily tries to argue about their accuracy.

The latest studies of the satellite photographs, the drainage analysis and a belt of soil found deep underneath the sand along the assumed path of the river Saraswati are the direct evidences of its existence. The archaeologists believe that it may have been dried out around 1800 BC when Rajasthan turned into a desert due to physical changes and also the tributaries of Saraswati would have changed their course and joined Yamuna and Indus rivers, but it should have been a magnificent river before 2500 BC. The Rigved (2/41/16,7/36/6,7/95/2) describes it as a beautiful river coming from the hills and meeting the sea. In Hindu scriptures, Ganga, Yamuna and Saraswati are generally mentioned together because their origin is the Himalayas. Saraswati river is believed to start from the Shivalik hills near Adi Badri and to the west of Yamuna's origin. First it ran somewhat parallel to Yamuna and then it moved towards Rajasthan and met the Arabian sea.

The Harappan civilization was discovered when an archaeological survey of India started excavating the site in 1921, located about 100 miles southwest of Lahore in Harappa village. Archaeologists believe the Harappan civilization to be existing around 2500 BC when it was abolished for unknown reasons. Up till now more than 200 locations have been discovered where evidences of similar civilization have been found. Out of these, most of them are found on the eastern side of the Indus river and near the ascertained bed of the river Saraswati that flourished around 3000 BC.

(1) The French scientist and statesman George Cuvier had estimated that a catastrophe had taken place around 5,000 years ago, when a great deluge flooded the areas that were previously inhabited by man.

(2) National Geographic of January 1930 said that for six days and nights the hellish rain submerged and destroyed the seashore area of Iraq; and

(3) in its August 1939 issue it said that Mayans started their calendar from some catastrophic event that goes back to about 5,000 years; and

(4) the Bhagavatam tells the same thing in a much more positive way.

Krishna tells His charioteer Daruk to go back to Dwaraka and tell the people, 'After I leave this earth planet, a fierce sea deluge will submerge the entire Dwaraka." (SB 11/30/47)

Thirty years after kali yuga started, in 3072 BC, Shukdeo is telling King Parikshit,

You should know that Dwaraka and the bay area of Iraq are very close and the land of the Mayan civilization, Mexico, is on the same latitude as Dwaraka. So the catastrophic sea deluge would have affected up to Mexico.

National Geographic (January 1930). "New Light on Ancient Ur." Excavations at the Site of the City of Abraham Reveal Geographical Evidence of the Biblical Story of the Flood.

"The earliest certain date at which we may arrive is 3100 BC, the date of the accession of Mes-Anni-Padda, the first king of the first dynasty of Ur… The discovery itself was made in the ancient cemetery, the site that has yielded the most magnificent and oldest treasures, containing burials that were laid down as far back as 3500 BC." (pp. 109,117)

"True, it was an ancient and a local Hood in a sense, but there is every reason to believe that it was something very much more than this… A flood that afterward came to be regarded not as a local but as a world flood." (p. 118)

"Let us summarize what we know about it. First and foremost, the remains beneath the flood deposit are the oldest and the deepest ever found at Ur. That is proved from the amount of soil cleared from the surface and from the age of the remains above. Secondly, the particular type of civilization obliterated by the flood never again appeared. Thirdly, above the flood deposit came a new people, the Sumerians who had just learned to write and whose earliest legends spoke of a great flood. The flood that they described was handed down to later tradition and finally became crystallized in the Genesis account." (p. 119)

"We may quote extracts from one of the early Babylonian tablets written in the wedge-shaped cuneiform script. Ut-Napishtim, the Sumerian Noah, tells of his adventures within the Ark; Six days and nights. Raged wind, deluge and storm upon the earth. When the seventh day arrived the storm ceased." (p. 120)

The article says, "The Maya calendar, like our own, indicates dates by marking periods of time reckoned from a fixed point in the past… Just as we start our calendar from the birth of Christ, the Maya begin theirs with the date of 4 Ahau 8 Cumhu, about 5,000 years ago, which must have marked some event of tremendous significance to them in their mythologic history." (pp. 214, 216)

(b) Nidhanpur Copper Plates of Bhaskaravarman are assigned to be written around 6th century AD and mentioned in the "Epigraphica Indica" volume XII, Calcutta (1913-14) on pages 65-79. It states in its verse 7 that after Vajradatt (who was the son of Bhagdatt of the Mahabharat war) his descendants ruled for 3,000 years, and then Pushyavarman became the king. After 12 generations Bhaskaravarman became the king who issued those grants (copper plates). Thus, not accounting for the errors and the omissions of the dynastic records, if you add approximately 400 years for the twelve generations to 3,000 years and also 1,500 years (the time lapse after the copper plates were issued) it comes to approximately 5,000 years.

(a) Bhavishya Puran. Vikram era started in 57 BC by Vikramaditya the Great as a commemoration of his victory upon the Shaks. There is plentiful literature on Vikramaditya, and in the Bhavishya Puran itself there are descriptions of Vikramaditya in more than 40 chapters between Pratisarg Parv I and IV. He was a descended Divine personality. His capital was Ujjain where the temple of Mahakaleshwar is famous. Bhavishya Puran (Pratisarg Parv I, chapter 7) says that, "After the elapse of a full 3,000 years in kali yuga (3102 – 3000 = 102 BC), a dynamic Divine personality was born who was named Vikramaditya. He was very intelligent and loving to his parents. When he was only five years old he went into the jungles to worship God. After twelve years, when he came out, God Shiv sent for him a celestial golden throne which was decorated with thirty-two statues. He then came (to Ujjain), adored Mahakaleshwar and established an elegant shrine." Bhavishya Puran further says that "the great King Vikramaditya ruled for one hundred years. Then his son Deobhakt ruled for ten years and his grandson Shalivahan, who established Shalivahan Shak era (in 78 AD), defeated the Shaks and ruled for sixty years." Vikramaditya belonged to Pramar dynasty in which there was another very powerful King, Bhojraj, who was eleven generations later than Shalivahan. The Pramar dynasty (which ends with Ganga Singh) is described in the first chapter of Pratisarg Parv IV.

In the earlier centuries Vikram era or Vikram Samvat was called Krit, Samvat or Malvesh Samvat. Later on from around 8th century it was called Vikram Samvat. But all the three mean the same thing. Krit means 'the pious' as he was the pious king, and Malvesh means the King of Malva state (which he was).

Kalidas, the greatest poet, writer and the literary figure of his time, living a pious life and sincerely devoted to his scholarly work, was one of the nine gems of King Vikram's court. Because of his great poetic and literary work he was called mahakavi.

(c) Alberuni. "Alberuni's India," first Indian print 1964 (S. Chand & Co., New Delhi) Volume I. In the second part of this book on page 4 Alberuni writes, "…the time which has elapsed since the beginning of kali yuga before our gauge-year, 4132 years, and between the wars of Bharat and our gauge-year there have elapsed 3479 years." In the Annotations (p. 358) of the same book Alberuni tells about his gauge-year, which is: "A.D. 1031, 25th February, a Thursday."

There is a difference of 968 years between 1031 AD and 1999 AD. Thus, adding 968 years to 4,132 years comes to 5,100 years, the period that has already elapsed since the beginning of kali yuga and up till today (1999), and this is exactly what is mentioned in the astrological journals of India.

Alberuni also mentions about Vikram era (57 BC) and also the Shalivahan Shak era which starts 135 years after the Vikram era.

There is also the dynastic chronology of Nepal that goes up to the Mahabharat war.

We have thus given enough evidences to establish the fact that kali yuga started in 3102 BC. Yudhishthir reigned Hastinapur for 36 years and 8 months. So, the Mahabharat war happened in 3139 BC. When Bhagwan Krishna left the earth planet and ascended to His Divine abode, immediately kali yuga started and a catastrophic rain, storm and sea deluge, that lasted for seven days, totally drowned and destroyed Dwaraka town. This catastrophe was also recorded in Babylonia's ancient town Ur (which was mythologized in the West as Noah's flood) and the ancient Mayan records. The dates of both are the same.

The unbroken chronology of the exact dates of all the Hindu kings of the 4 dynasties that ruled Hastinapur (up to Vikramaditya) since the reign of Yudhishthir is the most potent evidence and it could be easily understood by anyone, wise or dull, so as to believe that Mahabharat war had happened about 5,000 years ago in 3139 BC. 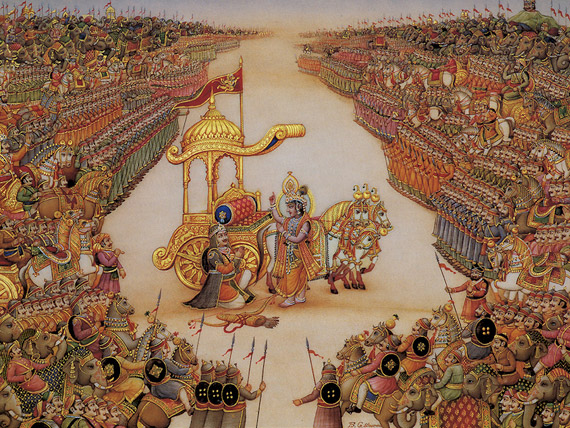 Source: The True History and the Religion of India