Dear devotees, my dandavat pranams unto to the lotus feet of you all.

I am glad to inform you that our most revered Gurudeva, Om Vishnupad 108 Sri Srila Bhakti Ballabh Tirtha Goswami Maharaj, personal associate of Supreme Lord Sri Chaitanya Mahaprabhu, gave Tridanda sannyas to four sincere and devoted souls on 20.3.2008, just prior to Gaur Purnima at Sridham Mayapur.

I was informed by my senior Guru-brother Srila Bhakti Vichar Vishnu Maharaj that Srila Bhakti Siddhanta Saraswati Thakur did not introduce a new form of  Tridanda sannyas, because it is already mentioned in our Sanatan Dharma scriptures which are eternal. There it is said that conditioned souls are engrossed in threefold miseries because of being under the influence of Mahamaya, the illusiory potency of Supreme Lord Sri Krishna and thereby they have forgotten their real duty to serve Him. In Sanatan Dharma scriptures we find an arrangement where conditioned souls are motivated into service of Lord Sri Krishna at a steady pace. Nothing is forced upon. Varnashrama dharma is part of Sanatana Dharma. There are four ashrams namely Brahmachari, Grihastha, Vanaprastha and Sannyas. In Kaliyuga one danda sannyas is prohibited, thus Srila Prabhupada Bhakti Siddhanta Saraswati Thakur preached vigorously for Tridanda sannyas. In Tridanda sannyas conditioned souls are instructed to serve Sri Krishna with their body, mind and words. Souls are asked to control these three and use them absolutely for the service of Sri Krishna, which is their actual duty, being His eternal servants. Only those who agree to absolutely use their body, mind and words for the service of Sri Krishna and His devotees are eligible to take Tridanda sannyas. After one accepts Tridanda sannyas he has to abandon all the duties pertaining to material family, society, area, country. He has to lift himself above all such actions and direct his actions into the service of Sri Krishna Who is at the root of everything and above all. 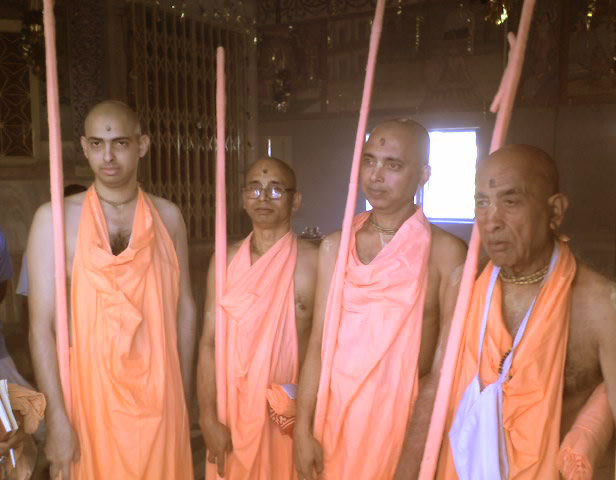 Introduction of the respected sannysis (On picture starting from left)

Srila Gurudeva said that when He was at Chandigarh last year during November/December, time for His departure had arrived. But Lord Krishna did not agree. Hence He is still here. Gurudeva further said that throughout His life He had never acted against the wishes of His Gurudeva. He acted as per His capabilities and followed the instructions of His Gurudeva (His Divine Grace Srila Bhakti Dayita Madhav Goswami Maharaj). He had done His best in maintaining His Guru's organization. He has ensured that the dignity of the organization established by His Gurudeva remained intact and reputed during His own life.  Since He has to ensure that organization of His Gurudeva remains such for number of years to come and He had not assigned organization's secretarial responsibilities, thus Lord Krishna asked Him to stay. He was looking for some young, literate, devoted and intelligent devotee who can take over secretarial responsibilities of organization. Thus He had given sannyas to Srimad Bhakti Jivan Yati Maharaj.

Srila Prabhupada Bhakti Siddhanta Saraswati Thakur has personally asked Srila Param-Gurudeva (Srila Bhakti Dayita Madhav Goswami Maharaj) to preach in Assam. Srila Param-Gurudeva began His preaching from Assam and established three centres over there. Guwahati is the main centre in Assam. This centre also overlooks a number of adjoining areas. A responsible, honest and educated devotee was required to take over the responsability of Guwahati Math. GBC of the organization proposed the name, which was accepted by Srila Gurudeva. Maharaj is a retired army personal and had remained unmarried. Apart from army duties, he was totally devoted to Math and used to spend time in Math only.

Gurudeva stated that His Gurudeva has registered Sree Chaitanya Gaudiya Math in West Bengal.  He was looking for a young, educated devotee who has interest in such matters. Thus He assigned this duty for lifetime to Srimad Bhakti Parangata Sannyasi Maharaj to remain vigil and to ensure that registration of this institution is never in jeopardy. Though Srimad Sannyasi Maharaj had well established business in Bombay, but being a bengali he could easily work in Bengal. Hence Gurudeva gave sannyas to him.

His Holiness Nishkinchan Maharaj has requested in past number of times to Srila Gurudeva that he would like to serve the institution till he lives, however would like someone to take over the responsibility of Chandigarh Math. Srila Gurudeva was looking for some educated, devoted and honest devotee who can take over the charge. Chandigarh is a very important centre as this centre caters to devotees across Punjab, Haryana, Himachal and Jammu, thus someone very special was required. Srimad Bhakti Vikas Vaman Maharaj (before sannyas) has been serving with devotion our institution since 40 years. Since five years when asked by Srila Gurudeva, he abandoned his household duty and came to Chandigarh Math to serve. Srila Gurudeva after observing his sincerity had been telling him that He would like to give him sannyas so that he can devote himself absolutely in the service of Math. When Srila Gurudeva observed that he is ready, he was given sannyas.