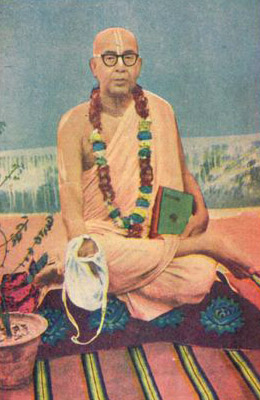 Founder-acarya of Gaudiya sangha. Born in a very high brahmin family of Bengal on the third February of 1888, he joined the Gaudiya mission in 1920 and as a most loyal disciple and lieutenant of his Gurudeva Srila Bhaktissidhanta Sarasvati Prabhupada, the great apostle of "Gaudiya Vaishnavism", Pandit Goswami with his dynamic personality, preached the gospel of Sri Krishna Chaitanya Mahaprabhu throughout the length and the breadth of the country and immensely contributed to the vigorous missionary work of the Gaudiya mission in India and abroad.

Sir John Anderson, the then governor of Bengal was much impressed with the extempore welcome address of "Goswamijee" when he first visited Sri Mayapur in 1935 and with the desire of presenting such thought to the west, he was pleased to introduce Pandit Goswami to Lord Wellington,  ex Viceroy and Lord Zetland, Secretary of State for India. Srila Prabhupada sent Pandit Goswami to England as missionary in charge in October 1936. The reputation he achieved was immediate and phenomenal.

All societies celebrated him. From their majesty the Emperor and Queen and the Royal family downward, he credibly approached one and all with the message of his master. He was the representative speaker for Hinduism in the World congress of Faith in Oxford 1937, and he delivered a series of brilliant and deeply impressive lectures in London and Oxford under the presidentship of Lord Zetland, and other distinguished personages which were impressed by his lectures. Lord Zeltand spoke once: he gives lectures which are soul stirring like I never heard before.

He found an Adoksaja Vishnu Murtee in Kensington park in August 1937. The title Sri Gaudiya sabghapati became famous with him. He established 24 preaching centers all over India. When he returned from the west he was celebrated in many cities. He disappeared from this world on 20th of May 1964 and his Srimurti is worshipped in Mayapur.