On the 25th of October, the day before Kartika started, we again went to do a preaching program in the Gwalior Central Jail. Subhaga Swami in his lecture convinced the Jail Superintendent to offer all the food first to the Lord and then serve Prasadam to the prisoners. In his thank you speech, the Jail Superintendent announced to 3,000 prisoners that from now on, they would serve them Prasadam.

After a few months gap, the Gwalior Central Jail invited us to do a program again for their three thousand prisoners. The only day open for us just happened to be the day before Rasa Purnima. We took almost 20 devotees with us including devotees from Peru, America, Germany, Russia, and Iran. Subhaga Swami and Amiya Vilasa Swami also came with us. Just the day before by the mercy of Vrinda Devi and the Vaisnavas, I was able to purchase one Toyota Qualis for taking devotees on parikrama. Its maiden voyage was to take the devotees to this jail program.

We arrived at the house of Dr. Mishra who had expired since our last program, but had been initiated by Radha Govinda Maharaja just some time before his passing. His family members were all chanting and he was listening to Srila Prabhupada's tape at the time of his departure. The family members have maintained regular kirtan programs in the house inviting many people. Many young students who come for these programs were there to serve us. They also donated one cow to our Gaushala in memory of Dr. Mishra. It just so happened that Sanaka Sanatana, the Gaushala-in-charge, was with us, and they were very pleased to meet him. Then they very lovingly served wonderful prasadam to all the devotees and then we had kirtan in their small kirtan hall.

Just as last time, when we entered the jail, there was a band playing bhajan music and a hundred prisoners dressed in yellow uniforms standing on either side of the path. They chanted Vedic hymns and showered flowers on the devotees as they passed by. The Superintendent explained that these prisoners in the yellow uniforms have been awarded the title purohita (priest) by the Gayatri Parivar.

We were led into a huge field inside the jail with a large stage and nearly three thousand prisoners were sitting eagerly awaiting our program as you can see in the photo. Then Subhaga Swami garlanded a large picture of Radha Shyamsundar and performed artika. The Superintendent also did artika as well as my self and other devotees. Then we were invited to sit on a raised platform on the stage. We also invited the Jail Superintendent, Sri Krishna Prakash Srivatsava, to sit with us. He has received the President's Award for his work in the field of prison management. Seeing his eagerness to arrange these types of spiritual programs for the benefit of the prisoners, it was easy to understand why he received this prestigious award. 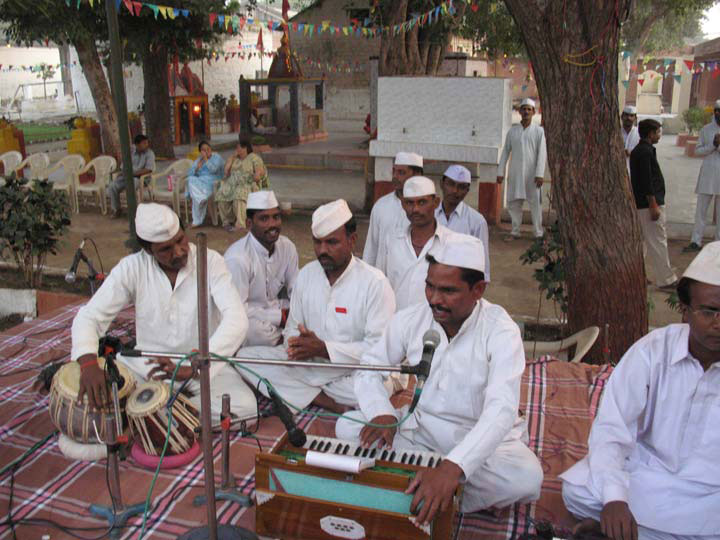 Then the prisoners' own bhajan band very devotionally sang a bhajan. As you can see in the photo, they were expertly playing, harmonium and tablas as well. This was followed by one of our devotees leading a short sit down kirtan of mahamantra. After this, I led a short Hindi bhajan about Lord Caitanya and the prisoners sang along. With an almost full moon rising in front of us, I spoke how tomorrow was Rasa Purnima and the beginning of Kartika. In Vrindavan hundreds of devotees from all over the world and every corner of India were gathering. I explained how this was all the mercy of Sri Caitanya Mahaprabhu who predicted that the changing would go all over the world. This prediction, I noted, was fulfilled by His Divine Grace A.C. Bhaktivedanta Swami Prabhupada. I concluded having them all chant very loudly the Mahamantra.

Next Subhaga Swami was invited to address the prisoners. He first apologized for Hindi not being his native tongue, but went on to give a very enthusiastic lecture with his sweet Bengali accent that brought applause several times from the crowd as seen in the photo. At one point he was making the point that part of the process of purifying the heart is eating only prasadam. Seeing a small temple to the right of the stage, he suggested that whatever they cook should be offered first to the Lord and then the prasadam served to the inmates. This met with very enthusiastic applause. 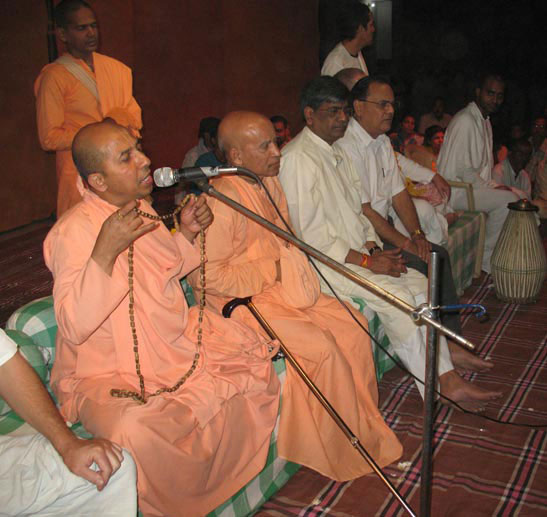 Following Subhaga Swami, Amiya Vilasa Maharaja said that it was getting late and darkness was filling the sky. So instead of speaking, he got all the prisoners to chant one round of japa with him as you see in the picture.

Sri Krishna Prakash Srivatsava then took the microphone to thank us. To the wild cheering of the inmates, he promised to offer all the jail food to Lord Krishna and serve prasadam to the prisoners. 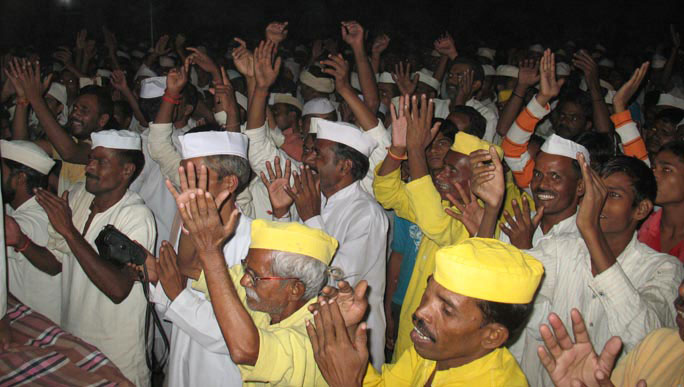 I then led a rousing kirtan with all the prisoners dancing with us as you can see in the photo. Sri KP Srivatsava can also be seen dancing very happily with the devotees with Jankinatha Dasa who is running the jail preaching program just to his left. It was really amazing to see almost three thousand prisoners jumping up and down in the kirtan. Then we left maha prasadam to be served to all the inmates in their respective barracks as it would have been too hectic to serve from the stage.

Sri KP Srivatsava then invited us into his office where he offered us nice refreshments and thanked us very warmly. Then we headed off back to Vrindavan for Rasa Purnima. Many things had to be done as we were going to offer sweetrice made with 150 liters of milk to Radha and Krishna and the gopis the following night as they danced the Rasa Dance. This would remain all night in the moonlight and be served to all the eager devotees the next morning after Mangala Artika.