Part I: A cautionary tale of purity, paucity and plunder 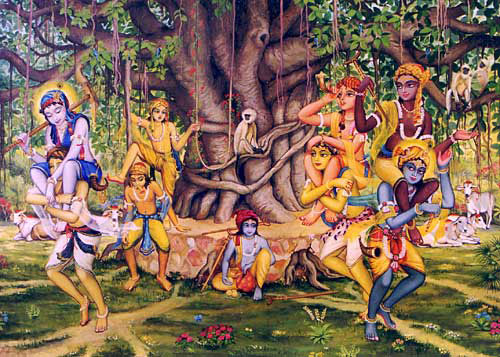 Vaishnava devotees of Their Lordships Sri Sri Radha Shyamasundar know one history of Vraja. It is a sweet history, full of divine loving relationships, lovers’ trysts, cowherd play, humor and spiritual rivalry between sahkas and sakhis. This ocean of sweet rasa is held on the backdrop of Vraja, with its teeming rivers, hills and forests, full of flowers, bowers, gentle cows and wild life. Like the soft velvet night punctuated by the brilliance of a million twinkling stars.

So this Vraja has a wonderful history, but there is another side, one which may surprise the reader who has studied the Srimad Bhagavatam? Since Brajendranandan Krsna left Vraja 5000 years ago many times Rajas have come and stamped their royal authority on the landscape. Often with varying degrees of success. Does it have any relevance?

This is a multi level history.

Krsna roamed happily about Vraja with his associates in the natural settings of trees, rivers, wildlife and purity, this is the history we know, but what happened after The Supreme Lord left?

After Krsna left, His grandson Vajranabha became the first King of Mathura. He would remember Krsna day and night recalling his Lila. The sages who had witnessed the pastimes guided him in memorializing the Lila Stalis of Krsna’s pastimes by installation of Thakurji, the construction of kunds and the commemoration of the forests and villages related to Krsna and his parishads pastimes.

For how long did these temples prevail is not know – nor do the atheistic secular government care to research such matters, preferring instead to plan industrialization of the area. It may be noted that an inscription to a temple dedicated to ‘bhagavatena’ has been found in the Dwadasaditya hill on top of which stands the Madan Mohan temple. This inscription was dated to the Maurya period which shows that a new batch of temples were being built about 2000 years ago. 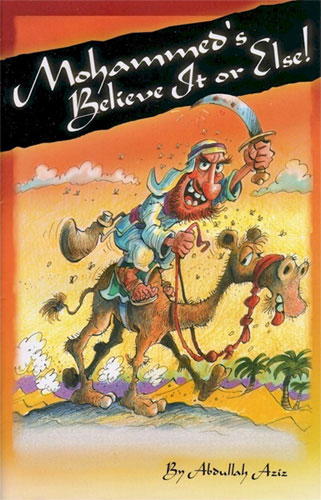 Then in 1013 a Muslim visayi was successful in first invading India and destroyed all the ancient temples in Vraja. Further massacres followed but despite these serious obstacles Vraja bhakti went on with the deities living in their temples, although they would sometimes have to go into hiding in the earth or water until the problems subsided and once again Krishna would reveal Himself to a qualified devotee.

What did it mean in those far away days to come and worship sweet Radha and Krsna in Vraja? It often took months of walking to arrive. Dense and dangerous forests or deserts lay on the path. The sincere might be spared by the carnivorous animal community. Arriving in Vrindavan, the Yatris would be soothed by the pure Yamuna and most beautiful forest in Bharatvarsa (from Kalidasa’s Shakuntala). Besides fruits, roots and cowherds milk there was nothing. Residence was provided by the large trees or a small grass kuti which one constructed.

None of the material so called comforts that we find in these degraded times were here, no developed society, grand houses, opulent food, satellite tv’s, internet or spousal companions. If you wanted to be there – you were there for Krsna only. 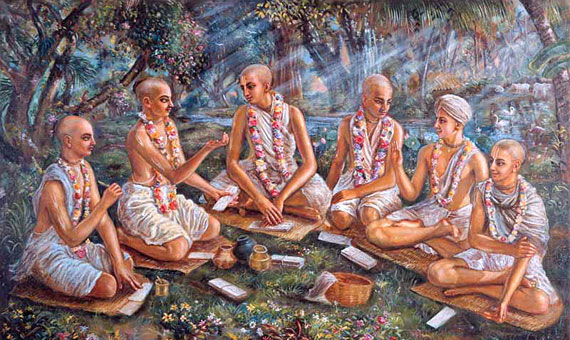 In the early 16th century many advanced vaisnavas assembled and enjoyed Krsna rasa together (from Bhaktamala). From the Gaudiya section Rupa, Sanatana, Jiva, Raghunath das, Raghunath bhatta, Gopal Bhatta, Ram Ray, Prabhodananda Sarasvati, the 3 Krsna dasa’s and many others. Also from other spiritual lineages Haridas Svami, Hit Harivams, Hari Rama Vyasa, and the many Nimbaraka Vaisnavas.

These personalities lived for Krsna. Once a day eating a handful of roasted chickpeas, or a cup of buttermilk, some dough thrown in the coals or a cup of flour mixed in water. They lived under the stars, sleeping under trees at night or in small grass cottages. Day and night tasting Krsna Nama and lila.

This lifestyle pretty much prevailed till the first quarter of the 18th century. The lineages of the various pure vaisnavas expanded and ascetics from other Sampradayas like the Ramanandi Sri Sampradaya also took up dedicated austere residence in large numbers. The aspiring would leave behind their grhasta ashram before coming or live separately in Vraja. During this time only small groups of sahajiyas managed to bring with them their desires and do as they wished.

In 1723 various kings took control of north India and Vraja in particular ousting extant Muslim rulers. One such king became the ruler of the Vraja area itself based at Bharatpur. This change in circumstances provided much relief to the area and much confidence to the pilgrims desirous of visiting there.

One should again remember that until now Vrndavan was the most beautiful and famous forest in all of Bharat itself and the surrounding forests on par in spiritual purity and also material beauty. The mistake made after 1723 was that the new rulers thought themselves worthy of fine palaces and that too in the finest of forests! Who made the first palace I can’t say; yet palaces and fortifications for these kings to relax in and enjoy protection began to be built. At first there were 3. Then smaller kings from other lands built another batch of palaces. Along with all these palaces of these kings the more rich ministers needed to be near by too and they made their havelis too!

Everything seemed to go on as planned – these materialists getting the hang of building lavish palaces in this wonderful forest, trying to enjoy their senses. The real Sadhus began to be displaced and at this time such bhajanandis as Srila Visvanath Cakravarti Thakur moved to Radha Kunda to be free from such gross interference to their bhajan.

Vraja is not an all forgiving Dham. “Sins committed in Mathura mandala have a reaction like a thunderbolt.” In 1557 a strong Muslim invader who was successful in looting the Muslim king in Delhi moved south with eyes on Agra but midway thought it not possible. The local king of Vraja was also unsuccessful in stopping him. A order was then given by this invader “ 5 rupees per head” which at that time was many times more value then today’s. The marauders set out and ended the lives of the extant “Vrndavanvasis” who had begun to disrespect Sri Vrndavan. Thus was the beginning of the materialism in Vrndavan and Vraja bhakti was now threatened with extermination. More palaces were built. The nature of the mode of passion upon which Ksatriya live makes one do what gives happiness immediately not thinking of the reaction. The rulers continued to visit their palaces and even more were built. Kings and their aristocratic nobles need plenty of servants too and servants need houses….

Thus began the Vrndavan that we see today. The custodians of the various presiding deities joined the queue and also started building their houses.

The Vedic culture teaches that in ones enjoyment one also offers a portion to God. All or most of these palaces of the kings and nobles contained deities of Sri Krsna – from which the title of “Vrndavan city of 5000 temples” came. Though I think the deities were of secondary importance than the palace itself – and thus most of the deities in these palace temples have either been moved, stolen, sold, placed in the Yamuna or sadly neglected. Many of these temples have already disappeared due to time.

In the current time some nice new temples have been built but sadly these are outnumbered 10 to 1 by apartments, private houses, shops and deluxe guest houses.

Vrndavan has been entirely built up and over run by this craze, but now other holy places in Vraja are in danger from this building movement. Till now, meaning 2007 the areas around – Govardhan, Varsana, Nandagaon and in all other areas had not been contaminated. But at the present it has begun especially due to the disregard and contempt of the newly wealthy Delhi picnic walas. These souls come out of piety to visit Vrndavan on the weekend and “enjoy” the quaint mood of the Dham. They pray at the many temples for more material facility and consider the possibility of having a nice little place to stay for the weekend. 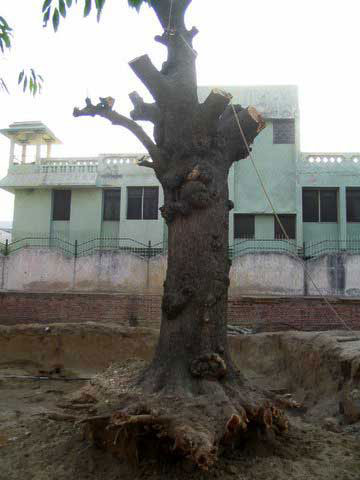 In this regard let us analyze what building your house anywhere in Krsna's Vraja means. First one has to buy the land which an offence to the Dham – which is Krsnas own body. The trees who are the direct ingredients and associates of Isvar in his Vraja are the cut down to make for the modern ’pukka” conrete building. Now bring in the cement which makes the soft sand, sharp and painful. Instead of using mud to make a thatched “katcha” hut one needs bricks or stone to build. The hills on which Krsna walked and played are being dynamited to facilitate the devotee and non-devotee builders. While bricks are made using the forests to bake. Now add the fans, ac, walls and roads and we have or “own” house in which we “live”. Land is expensive so no room for trees The byproducts of all the nice things we eat and drink drains straight into Yamuna devi.

The entire building theme is full Dham aparadha and is causing the nash (destruction) of Vraja. The only good thing to consider is that all these concrete buildings will not last for long (sadly not even the temples). In the harsh environment of Vraja they will last for a maximum of 50 to 60 years. What happens to all the resulting mess when they fall down I do not know. But I am sure in time, all trace of them will slowly disappear.

If you consider yourself devoted or even respectful to Sri Krsna – then please, for the sake of your “Bhakti Lata” your devotional creeper do not come to Vraja to build your short lived concrete abomination. If we are to enter the real mood of Vraja then we must follow in the footsteps of those great Vaishnavas who loved and held Vraja in such high esteem. Let Vraja be the place where we leave our material desires that bind us to this world of suffering, and enter into the simple mood of service to their lordships Sri Sri Radha Krsna. That is where the real sweetness of Vraj lies.

Come and bath this holiest of places with the water of your tears.