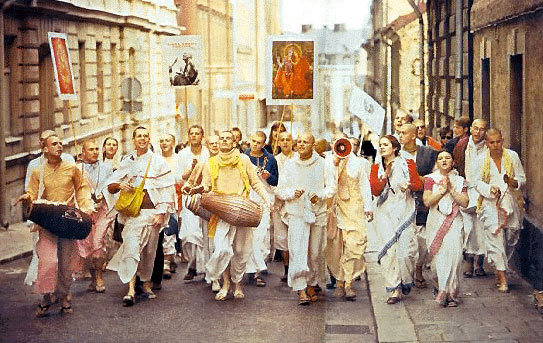 I remember a Krishna Janmastami festival in Germany. The devotees had acquired a new temple in a new area just a few weeks before the festival in 1972. A huge festival was to be held. The day before Janmastami, the local Motorcycle Rockers had discovered the presence of the Vaishnavas there. They arrived at the temple and threatened to beat everyone up. The devotees were thoroughly intimidated by the challenge of these rough young men on their motorcycles. Indeed, in the evening, twenty bikers drove up to the temple armed with iron chains. They screamed at the devotees, “Come out you chickens! Show your guts! We are going to teach you a good lesson.!” The devotees were locked inside the temple. They were frightened and prayed to Sri Krishna and Narasinghadeva.

The bikers outside the temple were all drunk, and the situation became very tense when one of them threw a big rock through the window of the temple room. The stone fell right on the Tulasi plant that was there. (Actually it was not a Tulasi plant, but the devotees thought it was Tulasi, and had been worshiping a basil plant in their attempt to please Srila Prabhupada.) When the stone fell on the basil plant, one devotee shouted: "They killed Tulasi!" The devotees inside were infuriated. They opened the door and all of them, men and women, ran out screaming. The Motorcycle Rockers were so surprised that they just ran away from fear of the wrath of the devotees. The first two of the Motorcycle Rockers who were standing right at the doorstep, were trampled to the ground by the devotees that stormed out of the door. The others fleeing in fear, jumped on their motorcycles and drove off.

The next day in the newspaper, there was a big article about the Hare Krishna’s beating the Motorcycle Rockers to a pulp. On sankirtana, people would congratulate us, but we were very scared that they the aggressors would return. Thanks to Prabhupada’s protection, they never showed up at the temple again after that one lesson.

Source: Sato Vrtteh – Following in the Footsteps of Previous Acaryas