Words from Gopal Gosh, one of Srila Prabhupada’s dear friends from his early days in Vrindavan. Gopal Gosh has been working all these years in the Vrindavan Research Institute with the Holy Scriptures of the Six Goswamis. 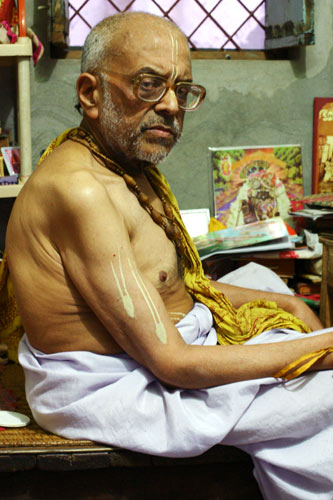 I am suffering in these days. I hope the time has come that I can reach Mahaprabhu. I am suffering so much because I made so many Vaishnava aparadha. When Srila Prabhupada first came from the west I discriminated againgst the western born Vaishnavas. I thought they were not real Vaishnavas. Srila Prabhupada invited me to come to the west. He told me that I should not worry and that I could help him a lot because I speak good English. He invited me to Radha Damodar temple and he gave me some prasadam, but I just took the tulasi leaf and gave the other prasadam to a beggar in the street. Now I am suffering the consequences of Vaishnava aparadha. Also I was so much absorbed in my work that I did not go and listen to all the lectures of Prabhupada. I missed all these wonderful opportunities. Later I met so many western devotees and they were so nice that I could understand that I committed a great mistake. When Mulaprakriti d.d. came to make an interview I was so happy that I could say something about Srila Prabhupada. Now I am lying here in the bed and I cannot even see the new Imlitala Temple. What is the use of my life now? I knew this place from the very beginning when Bhakti Saranga Goswami Maharaja came. At that time there were 2 sadhus living and the doors were all closed. And some gundas were keeping their loot in one of the rooms of Imlitala, but then Bhakti Saranga Goswami Maharaja changed everything. I still remember his dancing, jumping so high in the sky.