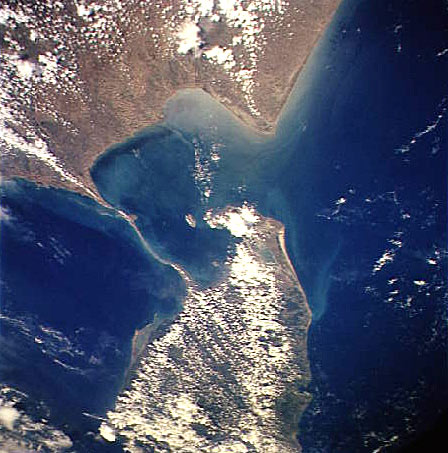 When I had visited Rameshwaram several years ago, I was told that one could see the line of rocks that lead from Rameshwaram to Sri Lanka which is the bridge Sri Rama had built for him and his army to go to Lanka in search for Sita. These rocks are situated just under the surface of the water. Then when these photos were published, I was not surprised, but nonetheless fascinated by the relevancy of what they revealed. The captions of the photos, as found on Indolink.com:

Space images taken by NASA (from the NASA Digital Image Collection) reveal the mysterious ancient bridge in the Palk Strait between India and Sri Lanka. The recently discovered bridge, currently named as Adam´s Bridge, is made of chain of shoals, 30 km long.

The unique curvature of the bridge and composition by age reveals that it is man made. The legends as well as Archeological studies reveal that the first signs of human inhabitants in Sri Lanka date back about 17,50,000 years ago and the bridge's age is also almost equivalent.

This information is a crucial aspect for an insight into the Ramayana, which was supposed to have taken place in Treta Yuga (more than 17,00,000 years ago).

In this epic, there is a mentioning about a bridge, which was built between Rameshwaram (India) and the Sri Lankan coast under the supervision of a dynamic and invincible figure called Sri Rama, an incarnation of the Supreme Being.

This information may not be of much importance to the archeologists who are interested in exploring the origins of man, but it is sure to open the spiritual gates of the people of the world to have come to know an ancient history linked to the Indian mythology.