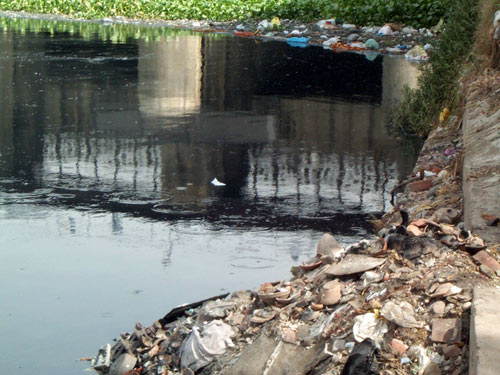 Yet, the Bio Oxygen Demand, or BOD levels, in the river have gone up, not just steadily, but alarmingly. In 1993, these were measured at around 130 tonnes a day, this more than doubled to 276 tonnes a day in 2004 and, in February last year, the level was measured at 428 tonnes – this is nearly 50 times the safe standard for bathing.

If, despite this, things are getting worse by the day, is it time to wind up, or at least seriously rethink river cleaning programmes such as the Yamuna Action Plan. The answer's obviously yes, but what should a new plan incorporate is the question. Examining the situation in just Delhi offers some pointers, to both the problems as well as the solutions.

The biggest flaw in the system design is that, to begin with, there is no accurate estimate of just how much sewage Delhi creates. The Delhi Jal Board estimates this at 2,900 million litres a day, primarily based on the amount of water it supplies. The Central Pollution Control Board, which measures the outflows at Delhi's drains, put this at 3,684 million litres a day.

Since the sewage generated is related to the amount of water supplied, according to the Delhi-based Centre for Science and Environment, this means around half of Delhi's water is met from ground water (that has other implications in terms of the capital's water security).

So, if the initial problem is that the agency in charge of sewage treatment system doesn't know how much sewage requires treatment, this gets compounded by the fact that the system design is flawed.

In places like Narela and Ghittorni, according to the CSE, the sewage treatment plants barely get any sewage to treat – the capacity utilisation figure is zero for Ghittorni, 1.3 per cent for Rohini, 10 per cent for Najafgarh and 12.5 per cent for Nilothi. It doesn't help that around 40-50 per cent of Delhi lives in unsewered areas, that is, their sewage goes directly to the Yamuna.

Of the total treatment capacity of 2,330 million litres a day that the 17 plants in the capital have, according to the CSE, the effective functioning is just around 70 per cent. That is, under half of Delhi's sewage actually gets treated. Not surprising then that the Yamuna is the way it is.

Obviously then, any solution that suggests itself has to include, to begin with, a correct estimation of what Delhi's needs are (this applies to the whole country, but this piece focuses only on Delhi since the capital has the most resources and, unbelievably, the best data-collection systems). It involves making sure all the sewage treatment plants are working all the time, that they are installed where there is a need, and so on.

Having sketched out the extent of the problem in its report 'Sewage Canal: How to Clean the Yamuna', the CSE makes some suggestions. To begin with, it asks for rationalising the water supply in the city – though residents of the city believe there is no water most of the time, the Delhi Jal Board says its supplies an average of 211 litres of water per person per day, a figure that is much higher than it is in most global cities.

Indeed, in cities like Pune, there are eco-system based treatment plants that treat up to 75 million litres per day within the drain itself.

The solution also involves dividing the capital into sewage circles, so that planning and execution is more decentralised and effective. Water cleaned from sewage treatment plants, but still not drinkable, can then be used within the circle for purposes of washing or watering lawns, for instance.

Right now, the treated water is poured back into the 22 open drains the city has which already have untreated sewage from the unsewered colonies, thereby negating the very purpose of cleaning up the water in the first place.

This is critical because, in Delhi alone, the government has plans to invest Rs 3,150 crore (Rs 31.5 billion) in laying 115 km of sewers to intercept waste from three drains. The city government has also asked for Rs 4,000 crore (Rs 40 billion) from the Union Urban Development Ministry under the Jawahar Lal Nehru Urban Renewal Mission.

For the country as a whole, the picture gets worse. The country's cities generate around 33,212 million litres of sewage every day and the capacity to clean this is under a fifth this; take into account the underutilisation of these sewage plants, under a seventh of the total daily waste gets treated.

Taking into account the current capital costs of creating large sewage treatment plants, according to the CSE, that works out to anywhere between Rs 7,566 crore (Rs 75.66 billion) and Rs 16,753 crore (Rs 167.53 billion).

Add to this the amounts of money required to build sewer lines and other related costs of the kind Delhi has spent/ plans to spend, and the sums go up several times. Before spending that kind of money, a second thought is surely called for. Not just because of the sums involved, but because the Rs 2,000 crore (Rs 20 billion) or so spent in Delhi alone has yielded precisely nothing.