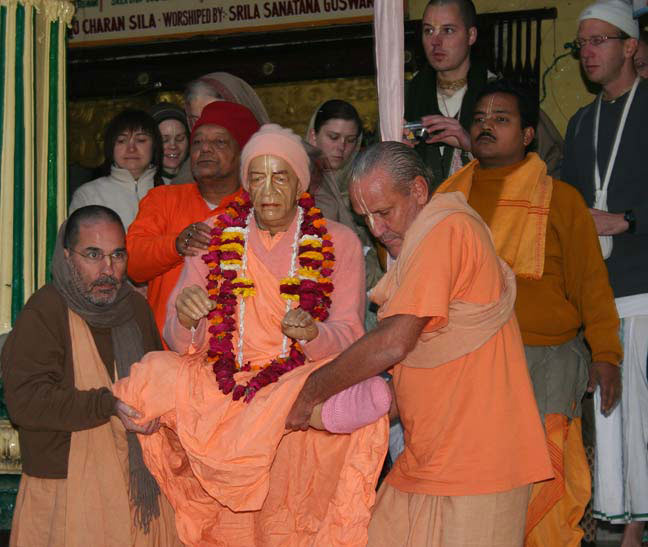 Recently an announcement was posted on “Dandavats.com” wherein the representative of ISKCON’s Sri Sri Krishna Balaram temple in Vrindavana [Shyamakrishna Das ] informed all the devotees around the world that “Srila Prabhupada’s Bhajan-kutir is now re-opened.”

Unfortunately, Shyamakrishna Das has given quite a misleading picture of what has transpired in the courts and what transpired on the day that Srila Prabhupada’s rooms were re-opened and the Deity of Srila Prabhupada re-installed and pujas resumed.

First of all the interim order passed by the Hon'ble High Court at Allahabad on 12th February, 2007 gave the keys of Srila Prabhupada’s rooms to Radha Damodar and stated that the rooms of Srila Prabhupada were to be open to the public and devotees from 8 am to 1 pm and again from 3 pm to 8 pm daily. 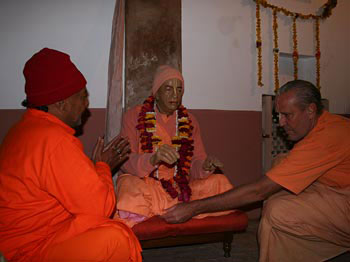 In his announcement on Dandavats.com, Shyamakrishna Das apparently wants to assure the devotees that “ISKCON is in control of the situation” at Radha Damodar temple but for whatever the reason they are not. In fact, when the Deity of Prabhupada was being re-installed in his bhajan-kutir, H.G. Srestha Prabhu, Co-Temple President, ISKCON, Krishna Balaram Mandir and other ISKCON devotees were not present at all. The Deity of Srila Prabhupada was re-installed in his rooms on the morning of Siva-ratri by Swami B.G. Narasingha, Swami B.V. Tripurari and Nirmal Chandra Goswami. There were about 70 devotees from various missions present for the event, which included bathing of Nirmal Chandra’s personal Deity of Srila Prabhupada, kirtan, offering the first bhoga to Srila Prabhupada in his room and arotika. But no ISKCON authority was present for the event.

It may also be noted at this point that during the last months wherein representatives of both parties would appear in the Allahabad High Court, no senior disciple of Srila Prabhupada, GBC man, sannyasi, or ISKCON guru even attempted to contact Nirmal Chandra Goswami to try and work out the misunderstandings in an amicable way. Had such steps been taken, as Srila Prabhupada would always do in such situations, the outcome of this issue might have been more favorable to ISKCON.

Later that day Narasingha Maharaja spoke with Srestha Prabhu about Srila Prabhupada’s rooms and the bad relationship that has developed between ISKCON leaders and the Radha Damodar Goswamis. Narasingha Maharaja encouraged Srestha Prabhu to sincerely endeavor to improve the personal relationship between ISKCON and Nirmal Chandra Goswami, who has been grievously offended by the demonizing propaganda that ISKCON leaders launched against him over the past seven or eight months.

Narasingha Maharaja has suggested that regardless of where this issue of Srila Prabhupada’s rooms ends up in the future, ISKCON owes Nirmal Chandra Goswami and his family an earnest apology.

“I live eternally in my rooms at Radha Damodar temple.” [Srila Prabhupada 1977]