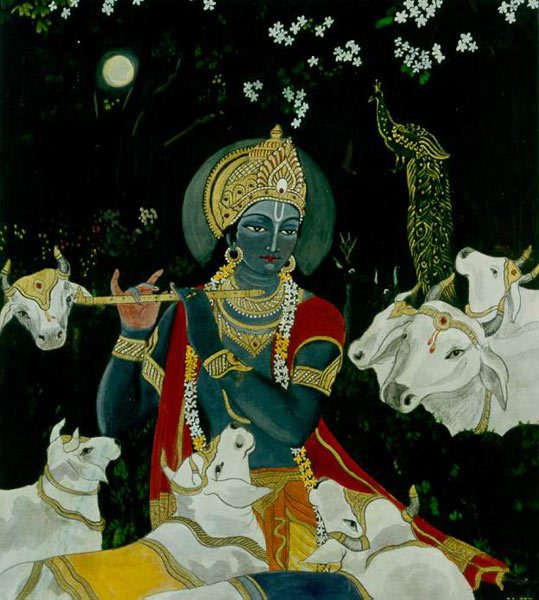 Dear friends and followers of Sanatan Dharma or Hindu religion!

Vegetarianism has been an important part of the glory of Sanatan Dharma. Mahatma Gandhi was a hero for the vegetarian movement around the world. Even the great scientist Albert Einstein declared vegetarianism to be the only viable solution for the sustainable way of living on this planet.

Hollywood stars are increasingly denouncing non-vegetarian diet and are coming out in defense of the abused animals, just like Lord Buddha did thousands of years ago when in the name of religious sacrifices, people endorsed and practiced animal killing and flesh eating. Buddha taught ahimsa, the principle of avoiding unnecessary violence of all kind and loving all creatures.

In today's society a great confusion is taking place and even in India, the land of the sacred cow, meat eating is on the rise and Hindus born into brahmin families are ashamed to maintain the tradition of their mothers and grandparents. They have no qualms to sit with business partners in modern hotels, eating meat and aping the degraded lifestyle of the West.

How unfortunate that they have forgotten the glory of their own homeland and ancient culture!

True, there have always been a class of men in India who did not follow Vedic recommendations. They were called chandalas and would also eat dogs like they do in Korea. But even they would not touch a cow!

The mlechha habits of cow killing and animal cruelty, brought in forcefully by the Muslim invaders, does haunt India since a 1000 years. But despite an unprecedented and unparalleled wave of cruelty, suppression and plunder, the poor Hindus remained largely faithful to their vegetarian traditions.

Those who did give up vegetarianism due to fear and discrimination, became Muslims or Christians! But even in the most adverse circumstances, being a Hindu meant being completely vegetarian!

However, what centuries of cruelty and suppression could not damage, has been severely dented by the recent modernization!

Even Buddhism has recently been reforming! The Dalai Lama announced recently that he has become a vegetarian. Other branches of Buddhism have always defended fully vegetarian lifestyles.

Eating fish and eggs is considered breaking Vedic traditions as well. Holy places used to be free of such items all together.

One big problem is the overall general worship of money around the world. If killing animals becomes big business people tend to do as if they do not see it.

Illegally catching animals, slaughtering them clandestinely and selling the flesh and leather is going on in many parts of India. In the day they call the poor cow holy, and at night she is the victim of legal criminals. This contradictory behaviour becomes the reason that children in India do not get any clear understanding of their own tradition and end up eating meat at international animal mass murder chains like McDonalds, KFC, Burger King and others.

We are rapidly loosing ground and India is missing to take the lead for the ethical treatment of animals and the promotion of vegetarian life and the planet saving behaviour of human beings.

Even if a person defends animal killing with world jugglery based on watered down traditions, they will not be able to defeat the scientific discoveries that meat production is the most prominent cause of depleting drinking water, depleting forest areas, lung diseases, depleting health of meat eaters, depleting mercy towards humans and even children in the womb.

Why ignore any further the treasure given by the Vedic sages? They knew even then how dangerous animal killing will be for the planet and development of human realisation.

Anyone who claims today that factory farming is harmless for the world is simply an uninformed person who has not done his nessesary homework for the survival of his descendants.

If we Hindus who have this wise tradition do not speak up, we are not fulfilling our obligation of responsible persons who know better!

We invite you to join as an activist, the www.spoonrevolution.org and help our people to understand what is the best way to eat for those who care for others like their own children.

Many things can be done and learned through the Spoon Revolution. Thank you for reading these thoughts – if you agree, please do something about it from today.

Because if we do not change our diet in relationship with animal killing, we will be held guilty of having deprived our children the chance to live in a sustainable environment. The day is not far away when humans would eat their own children!