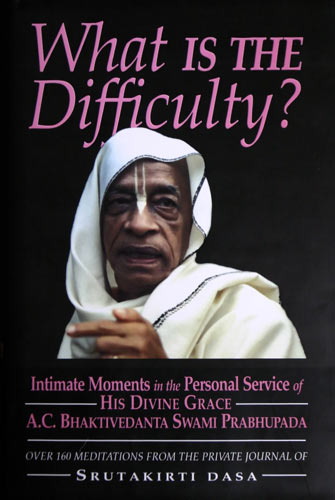 Srila Prabhupada was coming; devotees gathered from across America and the anticipation was reaching a crescendo. It was August 1972, in New Vrindavan, West Virginia. His Divine Grace A.C. Bhaktivedanta Swami Prabhupada was to deliver a historical lecture series entitled, "Bhagavat Dharma Discourses." The culmination would be Lord Krishna's appearance day (Janmastami), followed by Srila Prabhupada's appearance day (Sri Vyasa Puja) a day later. Everyone greeted him with tears of joy and gratitude.

For the next two weeks we were blissfully submerged in the ocean of his Divine Presence. All except one humble soul. While celebrations, festivals, kirtans and amazing lectures were relished by all like the essence of life itself, this one devotee was a prisoner in a smoke-filled primitive kitchen covered with black soot, choking on the smoke of burning wood. As we gazed upon His Divine Grace with tear filled eyes, the young devotee toiled in the kitchen weeping in separation as he cooked each meal for the multitude of devotees. Two weeks passed and he had not heard a single lecture or even seen his beloved spiritual master, yet he carried on as the servant of the servant of the servant.

Srila Bhaktisiddhanta Sarasvati Thakur has taught us, "do not try to see Krishna but try to serve Krishna in such a way that He is pleased to see you." Krishna Himself has spoken in the Adi Purana, "service to my devotees is more dear to Me than service to Myself." Although this simple soul was heartbroken, being so close but so far from his spiritual master, he personified this holy quality. On Srila Prabhupada's last day at New Vrindavan, this selfless soul received a message: "Srila Prabhupada is departing tomorrow morning, he requests you to travel the world with him as his personal servant!"

From that day on, many years would see our beloved godbrother Srutakirti prabhu at Srila Prabhupada's side as his longest-standing personal servant. Srila Prabhupada loved Srutakirti prabhu dearly. His unassuming nature made him dear to all of our hearts. There was no place for political ambitions in his surrendered life. He simply wanted to please his beloved Gurudeva with his heart and soul. In doing so he was given entrance into the intimate personal life of an unalloyed lover of God. Srutakirti Prabhu witnessed Srila Prabhupada humbly offering all credit to his Guru Maharaja and to his own disciples for unprecedented victories as he spread Krishna Consciousness all over the world. He gratefully observed the love, humor and fearless determination of a global acarya. Late at night while massaging Srila Prabhupada under a mosquito net, he often heard candid tales of his master's early life. Srutakirti Prabhu was an intimate part of Srila Prabhupada's daily life. He often bore witness to the personal character of Srila Prabhupada who steadfastly responded to attacks, confrontations and sad betrayal. As Srutakirti Prabhu dutifully performed his service, he was naturally privy to the inside truths of how Iskcon had developed in its formative years.

In October 2003, at Srimati Radharani's birthplace, over 2000 devotees have gathered. His Grace Srutakirti Prabhu inaugurated our Vraja Yatra with his memories of our beloved Srila Prabhupada. For five continuous hours he mesmerized the assambled devotees with enthralling stories. The multitude of devotees sat spell-bound by his every word, laughing and crying in spontaneous gratitude. Many expressed that they had never felt Srila Prabhupada's presence so deeply affect their hearts as it did through Srutakirti's heartfelt narration.

It is our great joy that Srutakirti Prabhu is now releasing his precious memories to the world in this long awaited book. I sincerely pray that all readers for generations to come may find supreme shelter of Srila Prabhupada's compassion through Srutakirtis heart-felt words.

Please contact Srutakirti Prabhu at: srutakirti.acbsp@pamho.net / sruto@yahoo.com to obtain a copy of this wonderful book.