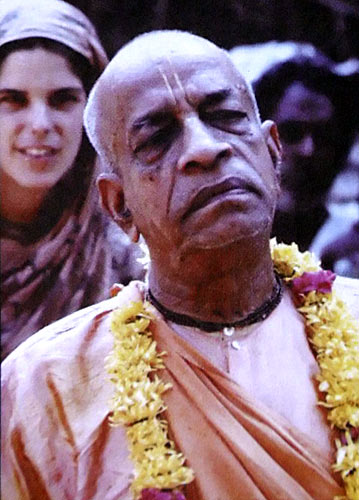 At this time, I had been cooking for Srila Prabhupada and massaging his transcendental body everyday for five weeks. I never understood why I was given this great fortune, but one day something new occurred to change my service to His Divine Grace. Yamuna Devi was in Srila Prabhupada's kitchen preparing his lunch. This had been one of my main services. After all, His Divine Grace taught me for two days in Dallas how to use the cooker!

That day, after massaging Srila Prabhupada, I bathed and dressed. Since I did not have to prepare his lunch, I did not know what to do with myself, so I walked around the temple compound. I had never been there before and felt a little lost, both in my service and in India. It was very different being in Vrindavan. I tried to appreciate my good fortune being in Krishna's home, and with His pure devotee.

Finally, I made my way to Srila Prabhupada's kitchen. Upon entering, I offered my obeisances. I never considered how offensive I was to take such liberties. Srila Prabhupada was sitting there taking prasadam. He was in the very spot where he had spent years devising his plan to conquer the world with Krishna Consciousness. He looked up with a beautiful glance and asked,

"So, you have taken prasadam?"

"No. Sit down and take prasadam," he told me.

I happily complied with his instruction, rascal that I was. It was one of the sweetest moments of my life. I was taking prasadam with Srila Prabhupada, just the two of us. In Vrindavan at Radha Damodar Temple, the mercy of the pure devotee is unlimited.

I was not prepared for what followed. After tasting Yamuna Devi's cooking, I realized I had never before tasted prasadam. In addition, I realized I had never cooked anything fit to be offered. Yamuna Devi was an empowered devotee of the Lord, sent here to sumptuously feed Srila Prabhupada. Each preparation tasted incredible. She made perfect chapatis. The subjis tasted as if they cam from the spiritual world. Seated with Srila Prabhupada I realized what a disservice I had performed by cooking for him. He sometimes said I cooked "nice American prasadam." Now I understood what he meant. Yamuna's cooking was so transcendental that it seemed like I had never eaten before.

"So, you like?" Srila Prabhupada asked as we were finishing.

He smiled and said, "So, today she has fixed your lunch. Now, tomorrow you cook for her. This is the Vedic custom. Today she has done some service for you, now tomorrow you must serve her."

At other times Srila Prabhupada said, "One has to always be ready to serve a person, not simply you are always accepting service. You call someone 'prabhu'. Prabhu means master. What is the question of you accepting service from your master? You are servant and you are calling them prabhu and accepting so much service from your master. Therefore, I am calling you 'prabhu'. It means I must render service. This attitude must be there, that I am everyone's servant because I am calling everyone 'prabhu'."

I never did cook for Yamuna Devi. That would not have been of service. It would have been an austerity for her to have to eat my "American prasadam." Mataji, please forgive me for accepting service from you.

Source: What Is The Difficulty? by Srutakirti das