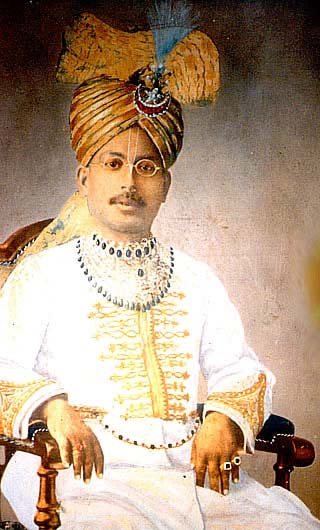 Since his early childhood Raja Raghunandan was inclined to worship Sri Sri Radha Krishna. His father who was also a great devotee could understand his sons feelings. Raja Raghunandan showed little interest in kingly affairs, he preferred to engage in devotional service and to worship his deities. To fulfill his sons desire and to relieve him from any administrational duties, Raja Kamaleshwari Prasad Singh constructed a beautiful temple where one can also take darshan of a Govardhan sila with the imprints of Srimati Radharani. Later when Raja Shivanandan, his elder brother, suddenly died, Raja Raghunandan had to take responsibilities for the Kingdom of Munger for which he frequently had to travel to Delhi. This kept him far from his beloved deities in Bihar.

Hearing about the glories of Vrindavan from his elders and his Gurudeva, Srila Vaman das Babaji Maharaja, Raja Raghunandan felt the inspiration to construct a temple in this holiest of all places. 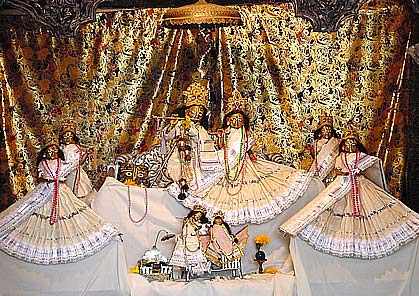 Between Jaipur Mandir and Govindaji which in the early century was just a forest area, there is a place called Radha vilas & Madhav vilas. Krishna and His Gopa friends would come from one side and Radha with Her Gopis from the other side to perform their daily pastimes & duties. They would cross at one point and see each other, but they would not stop so that nobody would notice their meeting. At this sacred place Raja Raghunandan acquired a beautiful piece of land and between 1925-1932 Sri Munger Raj Mandir was constructed and the deities of Sri Sri Radha Mohan with four Sakhis installed.

Many local residents thought that the King was crazy to construct a temple in the middle of the forest but slowly more and more devotees from Munger started to visit Vrindavan. Raja Raghunandan had to rent special coaches in the train from Munger to Hatras (at that time there was no Mathura station) to accommodate all the pilgrims. Nowadays people from all over the world come to Munger Mandir to take darshan of Sri Sri Radha Mohan and to meet with Sadhu Maharaja, who faithfully continues the service started by his grandfather.