Q. I was told that after Srila Prabhupada became ill he established in his temples the chanting of the Narasingha pranati (Prayer to Lord Narasingha) because it is a very powerful mantra for the protection of the spiritual master. On the other hand certain devotees have told me that one should not chant this mantra because in their words, "It sends Radha and Krsna far away." What then is the implication of Srila Prabhupada establishing such worship in his temples?

A. During my membership in Iskcon, Narasingha prayers were chanted after every arati ceremony, which in major temples were held six times daily. According to the book Prabhupada Lilamrta, our Srila Prabhupada established the chanting of the Narasingha Pranati in May 1967, after he had what appeared to be a heart attack. Therein it is written:

"Devotees entered the front room of the apartment, and Prabhupada told them to chant Hare Krsna. Then he told them to pray to Krsna in his form of Narasinghadeva. [Satsvarupa said:] Swamiji said we should pray to Lord Narasingha and the prayer should be 'My master has not finished his work.' [Jadurani said:] He taught us the prayers to Lord Narasinghadeva. He said the words one by one, and I wrote them down. I called up the temples in San Francisco and Montreal and told them the prayer. Swamiji said, 'You should pray to Krsna that, my spiritual master has not yet completed his work, so please let him finish.'"

The mantra Srila Prabhupada instituted in his society at that time is the Narasingha pranati that Mahaprabhu himself uttered in Puri Dhama along with a verse from Sri Jayadeva's Dasa Avatara Stotram, which is found at the beginning of his book Gita Govinda, a very high rasa sastra. Apparently, Jayadeva was not worried about disturbing the divine couple when he prefaced his book with this stotram, a poem that under scrutiny speaks of "krsnas tu bhagavan svayam" while glorifying ten of Krsna's avataras.

Neither was Sri Caitanya Mahaprabhu disturbed by the worship of Sri Narasinghadeva. In Caitanya-caritamrta it is written, "After seeing the Deity of Lord Narasingha in the temple, Sri Caitanya Mahaprabhu offered his respectful obeisances by falling flat. Then, in ecstatic love, he performed various dances, chanted, and offered prayers." All glories to Narasinghadeva, who is the Lord of Prahlada Maharaja and, like a honeybee, is always engaged in beholding the lotus-like face of the goddess of fortune." 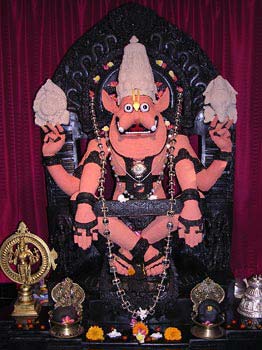 Within my sinful heart the six enemies headed by lust perpetually reside, as well as duplicity, the desire for fame, plus sheer cunning. Residing at the lotus feet of Lord Narasingha, I pray that he will mercifully purify my heart and give me the desire to serve Lord Krsna.

Weeping, I will beg at the lotus-feet of Lord Narasingha for the benediction of worshipping Radha and Krsna in Navadvipa, perfectly safe and free from all difficulties. When will this Lord Hari, whose terrible form strikes fear into fear itself, ever become pleased and show me his mercy?

Even though Lord Narasingha is terrifying toward the sinful souls, he offers great auspiciousness unto the devotees of Lord Krsna headed by Prahlada Maharaja. When will he be pleased to speak words of compassion unto me, a worthless fool, and thereby make me fearless?

He will say, "Dear child! Sit down freely and live happily here in Sri Gauranga-dhama. May you nicely worship the divine couple, and may you develop loving attachment for their holy names. By the mercy of my devotees, all obstacles are cast far away. With a purified heart, just perform the worship of Radha and Krsna, for such worship overflows with sweet nectar."

Saying this, will that Lord delightedly place his own divine lotus feet upon my head? I will experience sublime love for the divine couple, Radha-Krsna, and undergo the ecstatic transformations called sattvika. Falling on the ground, I will roll about at the door of Sri Narasingha's temple.

Here at Audarya we worship a Narasingha sila with these prayers of Thakura Bhaktivinoda and we sing Jayadeva's stotram on the appearance days of the various avataras mentioned therein. In these prayers Bhaktivinoda Thakura shows us how to pray to attain eligibility for raganuga-bhakti. Having attained such eligibility–or better stated, jata-ruci raganuga-bhakti–the worship of Narahari Bhagavan will certainly diminish in the life of the raganuga-sadhaka as he or she focuses exclusively on his or her ista-devata. However, in perfection the worship of Sri Narasinghadeva may again surface in an effort to achieve something for one's dearmost, Sri Krsna. In this case one would be praying to God to accomplish something for Krsna while unaware, due to the influence of yogamaya, that Krsna is svayam bhagavan. I also personally worship Narasinghadeva with a prayer to understand the meaning of Srimad-Bhagavatam, as he revealed its meaning to the Sridhara Swami, whose commentary Mahaprabhu so praised. I first offered this prayer in Jaipura, where Sri Jiva Goswami's Radha-Damodara are served along with a Deity of Narasinghadeva.

All considered, I do think it is important for devotees to cultivate a conceptual orientation to the worship of Narasinghadeva that is appropriate for serving Krsna in the mood of Vraja bhakti. Unfortunately, a good number of so-called devotees of Narasinghadeva are attracted to thoughts of personally "fighting with demons" and thus they worship him for wrong reasons. For Gaudiya Vaisnavas the right reason to worship him is as Bhaktivinoda prays, "to beg at the lotus-feet of Lord Narasingha for the benediction of worshipping Radha and Krsna in Navadvipa, perfectly safe and free from all difficulties." The best example of worship of Narasinghadeva is Prahlada, who was so gentle. Those who actually understand this sad-aisvarya form of Bhagavan become gentle as well.

As for the idea that the worship of Narasingha chases Radha-Krsna far away, let me give you an example of the opposite occurring. It is well documented that on the occasion of Narasingha Caturdasi Gopala Bhatta Goswami was deeply and prayerfully contemplating the intensity of Prahlada's bhakti and how it caused Sri Narasinghadeva to appear from a stone pillar. He contemplated this great wonder while wishing he had his own Deity of Krsna to offer seva-puja to and hoping that Mahaprabhu would soon fulfill his promise to visit him in Vrndavana. When he awoke, the Deity of Radha-Ramana, who is considered to be nondifferent from Mahaprabhu, appeared from one of his saligrama stones. So in other words, when Gopala Bhatta Goswami contemplated Prahlad and Narasinghadeva, the result was not the disappearance of Radha and Krsna but rather their appearance.

Worth noting here is that Srimad-Bhagavatam makes it very clear that Prahlada's ista-devata was Krsna. In a Sanga entitled "Eagerness for Vraja Bhakti," I cited references for this in reply to a question about his devotion. [Ed. note: see Eagerness for Vraja Bhakti] The point is that Narasinghadeva is a special manifestation of Krsna–Krsna appearing in a form suitable to the circumstances, the protection of Prahlada. Of course, Prahlada is a vaidhi-bhakta, so he worshiped Krsna in vaidhi-bhakti, not raganuga-bhakti.

It is also interesting to note that Srila Prabhupada told us to pray in one way in the beginning of his preaching and a different way as he neared the end of his preaching lila. In the beginning he asked us to petition Bhagavan Narasingha to protect his preaching–the message of Gaura, the order of Sri Radha's handmaiden, Nayanamani (Sri Bhaktisiddhanta Saraswati Thakura). In the end he told us when we asked if we could pray for him to pray to Krsna thus: "My dear Lord Krsna, if you so desire, please save Srila Prabhupada." Similarly, we find the worship of Narasingha Bhagavan in Sri Caitanya Mahaprabhu's adi and madhya lilas, but it is for the most part absent in his antya-lila. His antya-lila is filled with the exclusive worship of Govinda in the bhava of Radha.

For more information related to this topic, read the following Sangas: