A Krishna temple operated by the International Society for Krishna Consciousness (ISKCON) was the victim of a bomb blast at approximately 7:00 pm India time on Wednesday, August 16th.

Over a thousand worshippers were celebrating Janmastami, the most sacred observance of the year for devotees of Krishna, at a temple in the state of Manipur, in the northeast region of India. Unknown assailants threw a hand grenade into a crowd of people sitting under a large tent outside of the temple, watching a religious dance performance depicting Lord Krishna's pastimes.

A second grenade, which did not go off, was found an hour later in the most crowded area of the temple, near an altar bearing sacred images of Krishna. According to ISKCON spokespersons in Manipur, four people, including a young girl, are confirmed dead.

Approximately 36 people were injured, including five foreign nationals. An eight-year old girl, who had been playing the part of Krishna on stage when the bomb exploded, is among those severely injured. The troupe's dance teacher lost his leg in the blast.

"We are sickened and greatly saddened by this horrible, vicious act," said Anuttama Dasa, ISKCON's Minister of Communications. The victims were innocent devotees of God. There is no excuse for such wanton acts of violence. We pray for the victims and their families, and we pray that Lord Krishna will soon lift the terrible veil of hatred and violence that is covering our world. 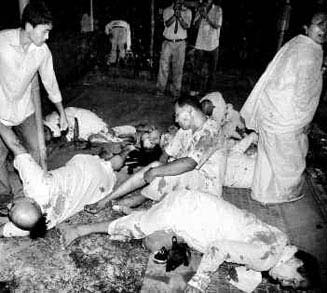 Among the injured, His Holiness Bhakti Svarupa Damodara Swami, an ISKCON leader in Manipur, was taken to a hospital, where he remains in stable condition.

Victims are being treated in several area hospitals. Indian Army and government officials are trying to arrange a special morning air flight from Manipura to Calcutta, where better emergency care facilities are available. Otherwise, victims will have to wait for a regularly scheduled afternoon flight from the remote State in northeast India.

According to the police, no militant groups or individuals have claimed responsibility for the bombing. The temple building did not sustain any damage.